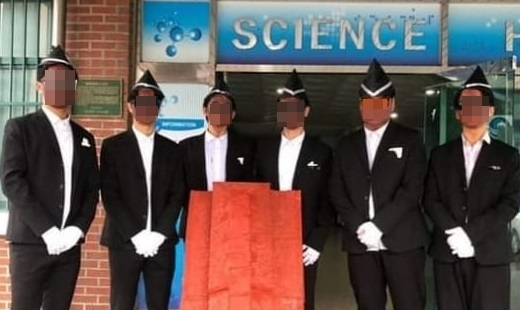 A student from Kongju High School received strong backlash for uploading a photo of students in blackface on Monday. [SCREEN CAPTURE]

A student from Kongju High School, located in South Chungcheong, uploaded a group photo parodying the “Coffin Dance” video on his personal social media account on Monday, two days after Korean permanent resident and entertainer Sam Okyere apologized to the mass for his criticism of Uijeongbu High School students for their depiction of blackface and the problematic video last week.

Okyere called the photo “offensive” but later apologized when the public criticized his choice of words and targeting of the high school students.

The second blackface photo was uploaded along with a hashtag of the entertainer's name.

“It was a mistake to create a public perception that there was nothing wrong with the photo of Uijeongbu High School students when Okyere pointed it out last week,” a comment read on an online community. “[The parody] is in fact a degrading form of racism, but the lack of reprimand has influenced the students in Kongju High School as well.”

After receiving a huge wave of backlash, according to local media reports, the student is said to have apologized and said the photo “never had any racist intention.”