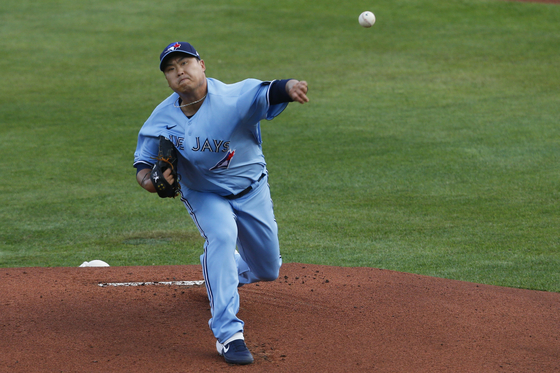 Ryu Hyun-jin of the Toronto Blue Jays throws a pitch during a game against the Miami Marlins at Shalen Field in Buffalo on Tuesday. [AP/YONHAP]


Ryu Hyun-jin of the Toronto Blue Jays had his start at home for the Blue Jays on Tuesday, or what passes for home this season as the Toronto team is forced to play its fixtures out of Shalen Field in Buffalo.

Ryu took to the mound for the Blue Jays' first game of the season at their new temporary home, facing the Miami Marlins on Tuesday. The Blue Jays will play this season at Shalen Field, usually the home stadium of Triple-A affiliate Buffalo Bisons, as Covid-19 makes traveling back and forth between the United States and Canada impossible.

Ryu had another strong game, picking up a quality start by giving up one run throughout six innings. Ryu left the mound when the Jays were leading 3-1 and as the Blue Jays added another at the bottom of the seventh, it seemed likely that Ryu was going to pick up his second win of the season.

The Blue Jays did go on to pick up a 5-4 victory with a run at the bottom of the 10th inning, but the statistical bonus does not go to Ryu.

Throughout six innings, Ryu gave up two hits, a run and two walks while striking out seven. Ryu’s performance dropped his ERA to 4.05 with one win and a loss.

This is Ryu’s first season with the Toronto club after signing a big four-year $80 million contract. Looking at his performance in the 60-game shortened season so far, he seems to be slowly getting back in shape.

Ryu was assigned as the Blue Jays’ starter in the opening game against the Tampa Bay Rays with high expectations, but he wasn’t able to meet them, as he gave up three runs, four hits and three walks throughout four and two thirds of an inning, starting off his season with a 5.79 ERA.


Things didn’t get much better in his second start against the Washington Nationals as Ryu picked up his first loss of the season by giving up five runs and nine hits throughout four and one third of an inning.

"Overall, I think [today's game] was good," Ryu said. "It felt like the batters were waiting for breaking balls in the beginning so I changed my approach to fastballs. I think that became important toward the end. I think i completed [my duty] well"


Heading into August, Ryu seems to be getting back in shape as he managed to finally pick up his first win of the season against the Atlanta Braves on Aug. 5. With another strong performance on Tuesday, Blue Jays’ manager Charlie Montoyo complimented Ryu, although he walked away with a no-decision.

“That’s back-to-back really good starts from him,” Montoyo was quoted as saying on Toronto Sun. “He’s our ace.”

Although the Blue Jays normally use Rogers Center in Toronto as their home stadium, this season they had no choice but to use their Triple-A affiliate team’s stadium due to the coronavirus pandemic. Before the season started, the Canadian government decided not to allow the Blue Jays to play at Rogers Center this year. The team tried to find other teams to share a stadium with, but in the end, they had to settle for the Triple-A stadium as their home for this season.

Since Shalen Field needed upgrades to meet major league standards, the first home game was delayed and the Blue Jays spent the first 21 days of the season on the road.

But that didn’t mean that the Blue Jays were technically always the away team. During their game against the Washington Nationals last month, the Blue Jays played at the bottom of the inning as the home team.

The Blue Jays will continue their series against the Marlins at Shalen Field on Wednesday, local time, or Thursday morning in Korea.