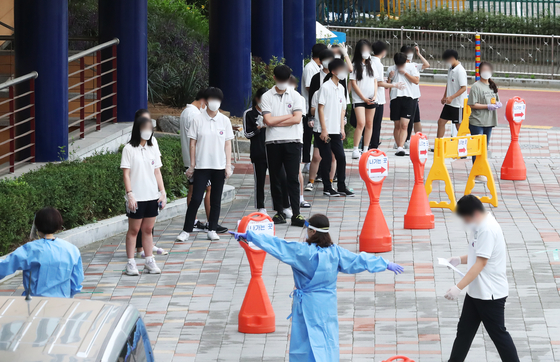 Of the new cases, 47 were local infections and nine imported, raising the total number of Covid-19 patients to 14,770 as of Wednesday midnight, according to the Korea Centers for Disease Control and Prevention (KCDC) Thursday. The total death toll remained at 305, with a fatality rate of 2.06 percent.

This marked the second consecutive day that the daily patient count soared above 50 and was the highest number of domestic transmissions since July 3, when 49 local cases were reported.

Seoul saw the highest number of new local transmissions with 25 patients, followed by 16 in Gyeonggi, two in Busan and one each in Gwangju, Ulsan, South Chungcheong and South Gyeongsang.

There were at least 11 employees of fast-food chain Lotteria who tested positive for the coronavirus as of Thursday, according to the Seoul Metropolitan Government, of which eight were residents of Seoul.

A group of 19 managers and employees of different Lotteria branches had a dinner gathering on Aug. 6 at a Chicken Baengi restaurant in Gwangjin District, eastern Seoul, from around 7 p.m. to 9:30 p.m. Around half of these individuals took part in a meeting at Lotteria’s Gunja Station location in Gwangjin District that afternoon from around 3 p.m. to 5:30 p.m., then had an early dinner at a jokbal, or pig’s trotters, restaurant nearby from 5:30 p.m. to 7 p.m. Four Lotteria employees tested positive Tuesday and seven on Wednesday. They were generally not wearing masks during their gatherings.

Park Yu-mi, a senior health official for the Seoul Metropolitan Government, said, “The patients were mostly managers and did not have direct contact with customers.” But since they held different roles in their franchise restaurants, authorities will check CCTV footage to see who they came in contact with. The Lotteria employees were said to be wearing masks while at work. 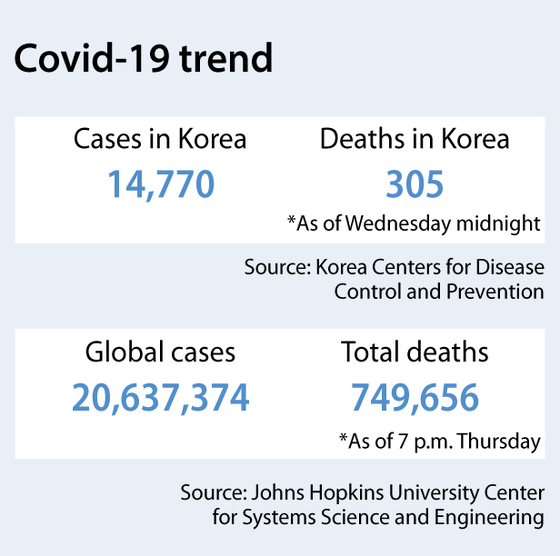 The KCDC said Thursday that so far 53 people who were in contact with the infected Lotteria employees have been tested, and half came out negative. The others are awaiting results.

There were no new cases reported Thursday linked to the Namdaemun Market cluster, which infected nine merchants and a family member.

However, a merchant at the Tongil Shopping Center in Pyunghwa Market in Jung District, central Seoul, and a spouse, were confirmed to have tested positive as of Thursday.

The Seoul city government said that there were 13 people who had contact with the Tongil merchant and that they are in the process of being tested.

Some of the infected students hung out at internet cafes, so-called coin noraebang (singing rooms) and dined together over the weekend ahead of their diagnoses.

Some 300 students and faculty at Jukjeon High School were tested Thursday.

Other students in cities including Busan, Ulsan and Goyang have tested positive in recent days.

Church-related infections were also found in Yongin, Gimpo and Goyang in Gyeonggi and in Seoul's Seongbuk District. There are now 34 cases linked to a Goyang church cluster.

There were also eight new cases related to the U.S. Forces Korea (USFK), including seven American service members and a Department of Defense civilian contractor, according to the USFK Thursday

Heath authorities warned of the continued transmissions in the Seoul metropolitan area and are concerned over the uptick in cases amid the summer holiday season.

Kwon Jun-wook, a deputy chief of the Central Disease Control Headquarters, said in a briefing Thursday, “Seoul and the metropolitan area are in a volatile situation,” warning that sporadic outbreaks can explode at any moment, especially over summer break.

There is special concern of a spike in cases ahead of a long weekend for the annual Aug. 15 Liberation Day holiday, which extends until Monday.

The Seoul Metropolitan Government on Thursday banned 26 civic groups from holding rallies in central Seoul on Saturday, Liberation Day. The rallies were expected to have brought tens of thousands of people to public areas such as Gwanghwamun Square and Seoul Plaza.