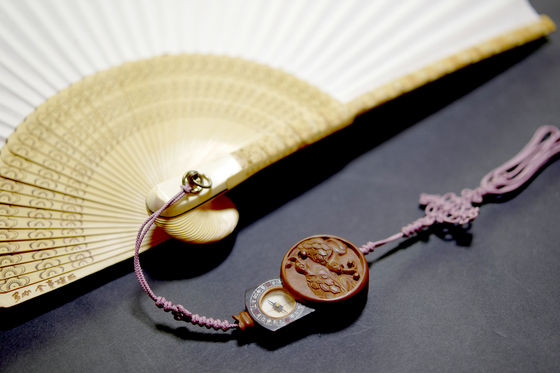 The knots that are used to attach the handle part of the fan are called seonchu. [SOLUNA LIVING]


JEONJU — Although the long and tedious rainy days of the monsoon season are finally behind us, sweltering summer heat has hit the entire nation. While air conditioning is the ideal way to quickly cool down indoors, traditional handheld fans are a good option for when you're out and about. The quaint beauty of the fan is just one reason that people choose to carry them during the warmer months.


Kim Dong-sik is a master artisan of hapjukseon or traditional folding fans. The 77-year-old craftsman began learning techniques for making hapjukseon in Jeonju, North Jeolla when he was just 14 in 1956 from his maternal grandfather Rah Hak-cheon. His grandfather used to make folding fans for King Gojong in the late Joseon Dynasty (1392-1910) and his family has been making fans for four generations.

Kim was designated as No. 128 intangible cultural property of Korea for a skill called seonjajang or traditional fan making. 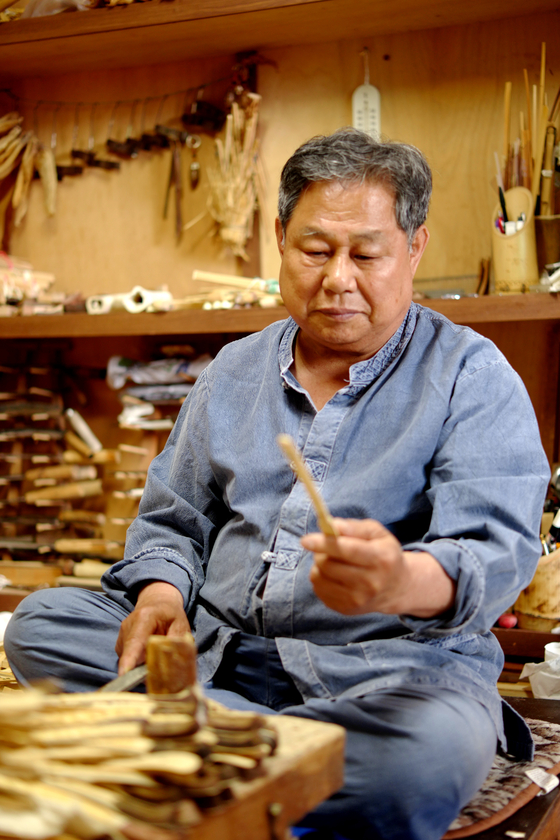 
While the fans themselves consist of simple components like bamboo strips and hanji, or traditional Korean paper, the manufacturing procedure is grueling and much more complex than it looks.

“It takes more than a week to make a single hapjukseon and it requires more than 150 manual touches,” said Kim.

Along with the folded hapjukseon, there is also another type of traditional fan that is rigid. 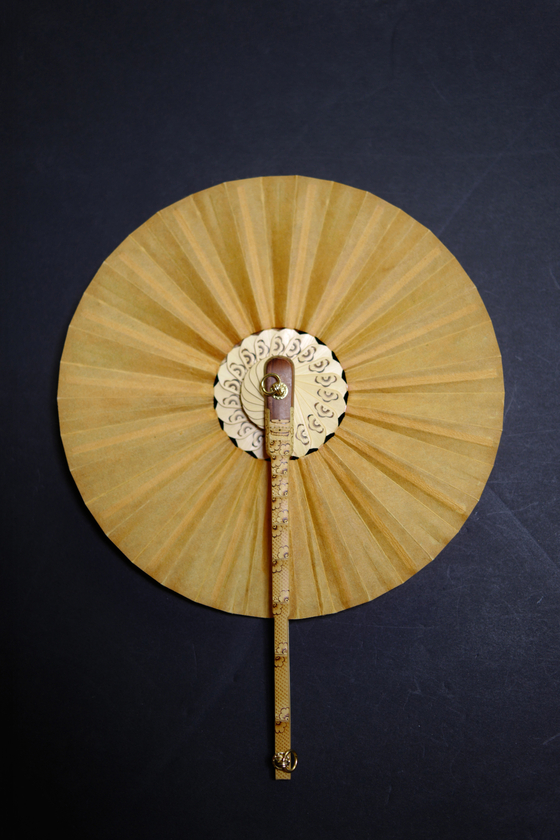 A fan created by Kim. This type of fan was used by kings and queens. Kim reproduces the fan in a smaller size. [SOLUNA LIVING]


As the hapjukseon fan is estimated to date back to the Goryeo Dynasty (918-1392), the folding fan offers some tidbits about ancient times. Fans made with 50 strips of bamboo were only allowed to be used by the king and royal families, while noblemen were permitted to use fans made with 40 strips of bamboo. Fans with less than 40 strips were for the lower classes.

Unlike folding fans from China and Japan which were made with the inner, softer parts of bamboo, hapjukseon fans are made with a combination of the hard outer part of the bamboo, as well as the inner part, guaranteeing more durability.

During the Joseon Dynasty, a state-run agency for fan making was set up in Jeonju and the fan manufacturing procedure was divided into six steps, with each done by different masters. The procedures include a stage where bamboo is thinly sliced and a stage where shapes and patterns are engraved on the handle part of the fan. Kim is a master of all the stages.

The first stage of making a foldable fan starts with sourcing quality bamboo.

“Bamboo with spotless and glowing skin is considered high quality. To produce a refined hapjukseon, you need a bamboo tree that has, at least, 48 centimeters [18 inches] between each node. But it sometimes takes years to get such a tree,” Kim added. 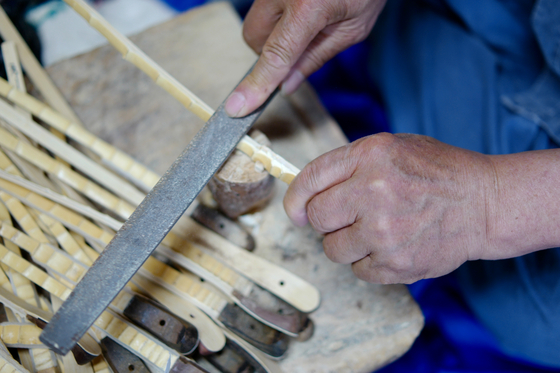 
When a bamboo tree is ready, you have to peel off the bark and boil it in sodium hydroxide for between 30 and 40 minutes. When the bark is dried, it will turn a yellow color. The next step is slicing the inner part of the bamboo into strips that are about 0.3 millimeters (0.01 inches) thick, or thin enough to transmit light.

When making a foldable fan with 40 bamboo strips, a total of 80 bamboo strips are needed as two strips are glued together to make one rib of the fan. The two sets of outer ribs are called byeonjuk. Despite the number of strips that go into making the fan, it measures a mere 2.9 centimeters in thickness when it is finished.

“Once I had technicians from Japan and China who were here to learn the fan making techniques but after they saw how I made it, they said, ‘this is not an easy job’ and they returned home.”

Traces of hard labor are visible on Kim’s swollen fingertips. Kim said when micro-thin bamboo thorns are stuck in flesh, they are hard to find and pull out.

Two types of glue are used when putting the bamboo strips together. Fish glue made from croakers is blended with another glue made from animal skins, tendons and bones.

When the bamboo framework is complete, it is tightly tied up for a week for thorough drying and then the artisan carves the handle.

After that, hanji is plastered to the frame. For a final touch, ornaments are added to the handle. Every stage is still carried out in traditional ways. 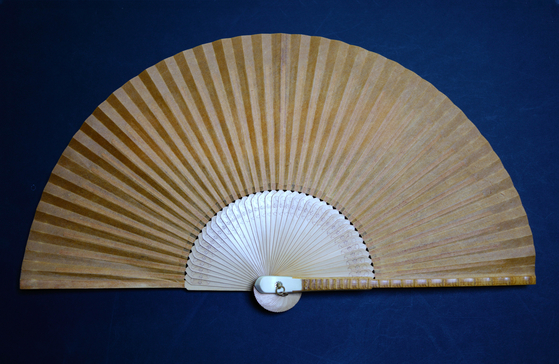 Hwangchil, or golden lacquer, is painted on a fan made with hanji, or traditional Korean paper. [SOLUNA LIVING] 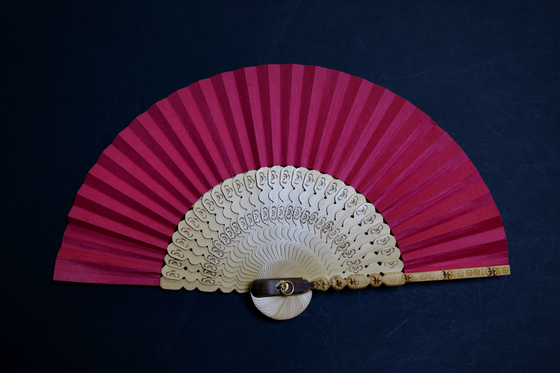 Sometimes silk is pasted on instead of hanji. [SOLUNA LIVING] 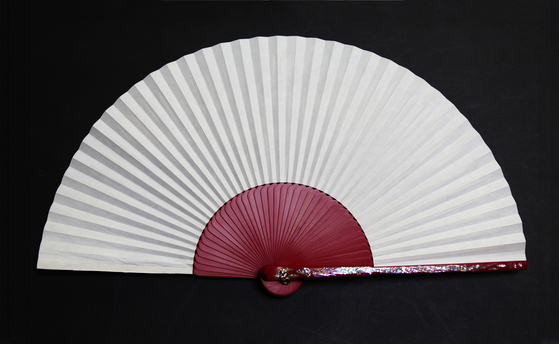 A creation of Kim's. The rib part is decorated with lacquerware inlaid with mother-of-pearl and the bamboo strips are painted with traditional red paint. [SOLUNA LIVING]


“Noblemen during the Joseon Dynasty would compete with each other over different styles and lavishly adorn their hapjukseon,” Kim said.

Traditionally, the deung or the part that is held, used to be made with Ceylon ebony trees, ivory and cow bones.

Byeonjuk, the two outer ribs, is decorated with thin lamella from turtle shells, or with traditional lacquer varnish.

One of Kim’s creations was used as a prop in the 2014 film “Kundo: Age of the Rampant," and it was held by actor Gang Dong-won, the lead role in the period film.

“I lent the fan because they said it was necessary for the filming, but they later threw it away after the fan was broken. I saw the film and found out that the actor was fighting by holding the fan in one hand. It’s a piece of art for me but I felt bitter that they treated it that way.” 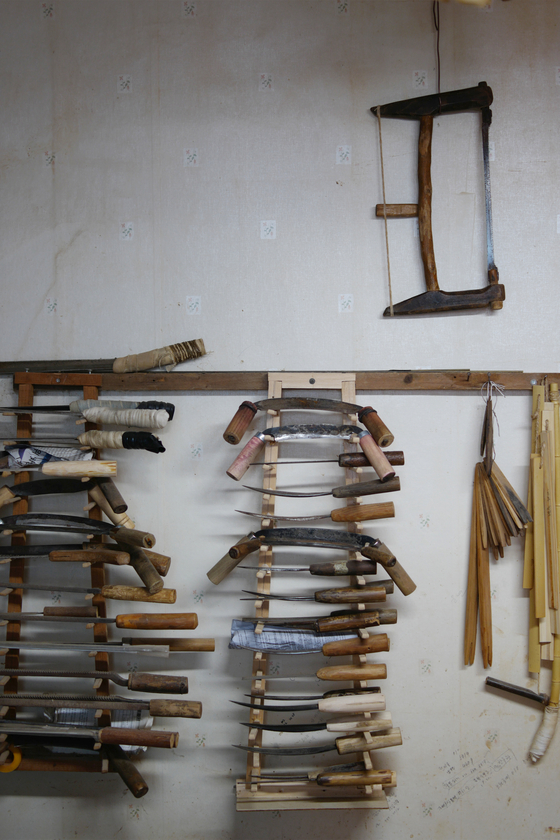 Tools used by Kim. Some of his tools are 100 years old. [SOLUNA LIVING]


When asked for tips when buying traditional fans, Kim said, “If you’re buying a fan, buy something good.” The more you use it, the better it looks, according to Kim.

“If you buy a cheap one, there is a high chance of you throwing it away. Sometimes we need stylish accessories. Hapjukseon will lighten up your mood just by possessing it.”

Watermelon you waiting for