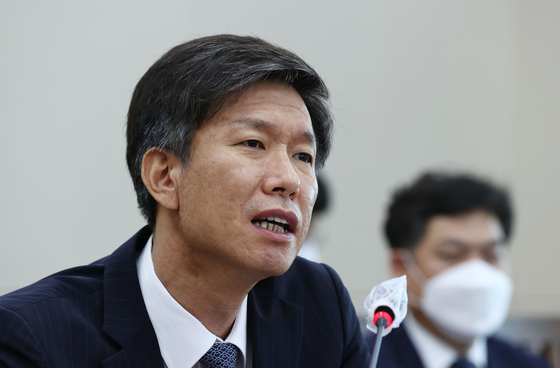 Kim Dae-ji, the nominee to head the National Tax Service, answers questions from lawmakers during his confirmation hearing at the National Assembly in Yeouido on Wednesday. [YONHAP]


The nominee to head the National Tax Service (NTS) stressed during his confirmation hearing on Wednesday that he would focus on cracking down on illegal real estate activity.

He also said the tax agency will look into any tax dodging involving the controversial pastor Jun Kwang-hoon, whose church is at the center of the most recent resurgence of Covid-19 in Seoul.

During his confirmation hearing on Wednesday, Kim Dae-ji said the tax agency will focus its investigation on tax dodging including in real estate transactions and offshore tax havens.

“We will take stern action against those that fail to pay taxes or evade taxes during the [current] national crisis,” Kim said.

He said the target will be those that disparage lower-income households by living luxurious lives through hidden wealth as well as intentionally avoiding paying taxes.

The nominee said the tax agency will support small businesses that have been suffering through Covid-19.

He also said the tax agency will provide customized tax information for companies that participate in the Korean New Deal, pushed by the current administration.

Kim said also said he will look into whether there has been any tax dodging committed by pastor Jun.

“While I can’t give details of individual taxpayers, if there is any tax dodging, we will take stern action,” Kim told lawmakers.

As of Wednesday noon, 623 members of the Sarang Jaeil Church have been confirmed to be infected with the novel coronavirus.

The number of cases could spike further as members of the church and the pastor attended a rally against Moon Jae-in on Aug. 15 in central Seoul.