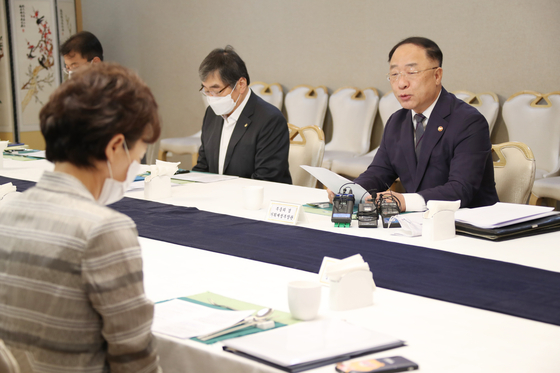 
Jeonse-to-rental conversions are becoming less attractive for owners of apartments as the government adjusts the formula for pricing.

The move comes as landlords are rushing to change the terms of their contracts with tenants after legislation was passed requiring an automatic extension of jeonse, or long-term housing rental deposits, and a cap of 5 percent on jeonse price increases.

On Wednesday, the government said that monthly rents will be capped at 2.5 percent of jeonse prices, down from the previous 4 percent.

The change will be effective in October.

The government said the adjustment is the result of low interest rates.

“There are concerns that the current 4 percent rate will only speed up landlords switching jeonse to monthly rent,” Finance Minister Hong Nam-ki said during the government real estate monitoring meeting on Wednesday.

He said the government has lowered the level to 2.5 percent to match the cost of money, and added that the landlords will not lose as a result of the change.

As of June, the rate on jeonse loans is 2.26 percent and 2.49 percent for mortgages, while the interest rate on one-year deposits is 1.4 percent and on 10-year Treasuries is 1.31 percent.

The finance minister stressed that the real estate transaction market has been stabilizing since July after the government announced its measures in June and July, which increased taxes on those owning multiple apartments and set into motion a plan to increase the supply of apartments.

Hong said the jeonse market is showing signs of instability.

“[Landlords] are trying to raise jeonse contracts before the [tenant protection] laws are enacted,” Hong said. “This has led to shrinking jeonse supplies.”

He apologized about the recent increase in jeonse prices while saying that the tenant-protection legislations would benefit 8.45 million households currently living in rented apartments.

“However, the jeonse price increase in the second week compared to the first week in August has slightly slowed down,” Hong said. “The government will continue to closely watch the market situation.”