Commercial rent support to be extended through June

Commercial rent support to be extended through June 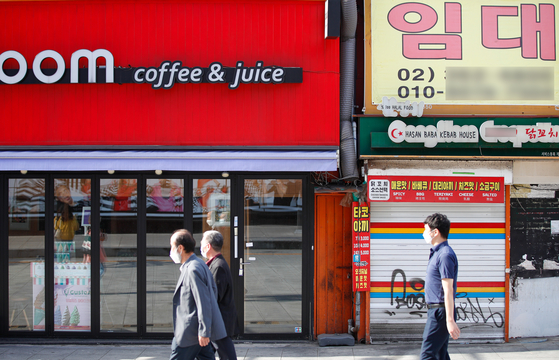 A commercial unit needs a new tenant as small businesses have been closing amid the coronavirus pandemic on Sept. 27 in Sinchon, central Seoul. [NEWS1]


Tax benefits supporting a cut in commercial rents are to be extended until June next year.

During a government meeting Thursday, Finance Minister Hong Nam-ki said the government will further extend the income and corporate tax credits until the first half next year as small shops, despite their efforts, continue to face difficult conditions.

“Many landlords have voluntarily participated in the good landlord campaign of voluntarily lowering rent, which was kicked off in Jeonju Hanok Village, which President [Moon Jae-in] personally mentioned in February and encouraged others to follow,” Hong said. “So far more than 40,000 small businesses have directly benefited from the lowering of rent.

“The [central] government and local government as well as public institutions have also aggressively participated in lowering the rent of [publicly-owned] properties in addition to the tax credits.”

Despite such efforts, small businesses continue to face difficulty.

“Small business revenue struggles to recover to past levels, while empty commercial stores are increasing in number, and the number of self-employed with employees has been shrinking,” Hong said.

According to Korea Credit Data, the revenue of small shops since the resurgence of the pandemic in August has declined more than 10 percent on average year-on-year.

The number of self-employed business with employees shrunk 165,000 in October compared to the same period a year ago, indicating that such small shops have been laying off employees.

“We’re concerned that the capacity to manage the crisis is waning,” Hong said.

According to the Korea Federation of Micro Enterprise (KFME) survey, the biggest burden that small business owners have cited was rent, at near 70 percent, followed by interest, at 11.8 percent, labor cost, at 8 percent, and taxes, at 5.4 percent.

The finance minister said in addition to the tax benefits provided to landlords participating in the lowered rent campaign, the government will also provide other support to encourage more to join.

“We will provide low-interest government-loan programs temporarily until June next year,” Hong said.

The finance minister said maximum 30-million-won loans with three-year maturities and an annual interest rate around 3 percent for landlords participating in the rent campaign were being considered.

For those owning stores in traditional markets, government supports, including vouchers as well as improvement in parking, will be extended to 2022.

“It is true that Covid-19 has thrown our society into a huge difficulty,” Hong said. “However, as we have seen the relatively favorable performances in the economy thanks to K-quarantine and K-New Deal, we are wisely overcoming the crisis.

“As we have seen through the good landlord campaign, small shops could overcome difficulties if we share the burden and join forces based on consideration and interest.”

During the same meeting, the finance minister stressed that the country currently is in a critical time that would determine the recovery of the economy.

He particularly emphasized the need to focus all forces in revitalizing consumption, especially in small shops in commercial alleyways and regional economies.

The Finance Minister expressed optimism over the results of the U.S. presidential election and its impact on the Korean economy.

“Looking at the policy promises of the U.S. President-elect [Joe] Biden, many changes are expected to take place including a stimulus package, innovative policies on the manufacturing industry, restoring jobs and the middle class, expansion of environmentally friendly investments as well as the return of multilateral [trade agreements] and strengthening of cooperation with allies.

“The impact on the global economy and the increase of trade is expected to have a positive influence on the Korean economy.”

The Korean government will be creating a task force to focus on economic cooperation with the new U.S. administration.