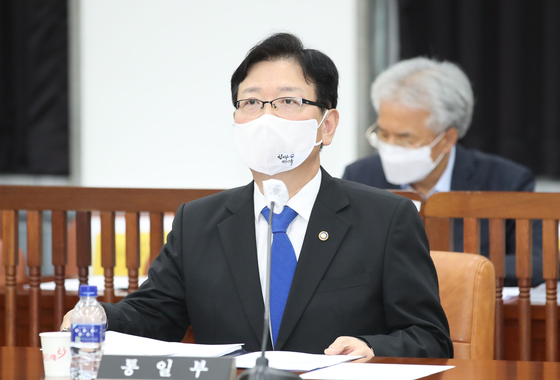 Vice Unification Minister Suh Ho attends a parliamentary hearing on Monday, where he told lawmakers about the ministry's plan to scrap a bartering deal with North Korea. [YONHAP]


South Korea’s Ministry of Unification on Monday said it slammed the brakes on a plan to exchange goods with the North after a North Korean company involved in the process was found to have been flagged under international sanctions.

The brainchild of newly appointed Unification Minister Lee In-young, the plan had envisioned allowing a South Korean cooperative union to trade sugar with a North Korean company in exchange for liquor made in the North.

Brought in to salvage inter-Korean relations in a free fall, Lee hoped that bartering goods could offer a way for the two Koreas to engage in economic transactions without the use of bulk cash and thus bypass United Nations sanctions on the North — the “creative solution” that officials in Seoul were searching for.

The sugar-for-liquor deal represented the first opportunity to put this theory into action, and the ministry was strongly considering approving the trade within the month.

But the plan met an unexpected snag when Seoul’s spy agency, the National Intelligence Service (NIS), reported on Thursday that the North Korean firm involved in the trade, called the Korea Kaesong Koryo Insam Trading Corporation, had, in fact, been under sanctions the whole time.

On Monday, before the National Assembly’s Intelligence Committee, Vice Unification Minister Suh Ho admitted that trade could no longer be allowed as it potentially constituted a violation of sanctions.

Not much is known about the Korea Kaesong Koryo Insam Trading Corporation, as is the case with most of North Korea’s business operations, but the NIS believes the firm is a front for Pyongyang’s so-called Room 39, an organization in the regime responsible for generating foreign currency for its leaders.

Rep. Ha Tae-keung, an opposition lawmaker on the Intelligence Committee, told reporters that the Unification Ministry had apparently failed to properly vet the companies involved in its planned exchange.

The decision to withdraw the plan puts a damper on Lee’s ambitious plans to expand contact with the North, initiatives he vocally pronounced last week should be independent from U.S. oversight through a consultative body shared with Seoul.

Sources in the ministry say a variety of other trade initiatives are under consideration, raising the likelihood that some sort of exchange may take place as long as the North is willing to cooperate.

“The Korea Kaesong Koryo Insam Trading Corporation is just one of many contract partners under consideration from the North,” said a ministry official. “In light of the concerns presented about the company in question, the ministry is negotiating a revision to the terms of the contract in liaison with the [South Korean] company that requested approval [for the trade].”

The mishap over the bartering plan however also highlighted a failure to communicate between relevant agencies in the South Korean government, in spite of the importance the Moon Jae-in administration has placed on its inter-Korean agenda.

Last week, the NIS and the Unification Ministry presented widely contrasting analyses about flooding at a North Korean dam earlier this month, leading lawmakers across the aisle to call for closer communication between the two agencies.