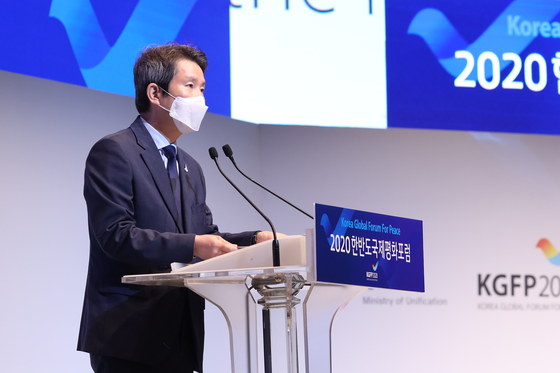 Unification Minister Lee In-young speaks at the Korea Global Forum for Peace, an event hosted by the ministry, on Monday. The event was broadcast live online. [UNIFICATION MINISTRY]

In an address delivered at the Korea Global Forum for Peace, a yearly event organized by the ministry, Lee noted the importance of incremental exchanges with North Korea in the fields directly affecting the public’s well-being, like public health, disease prevention and the environment.

“Small steps are better than no steps at all,” Lee said, quoting from Willy Brandt, the former West German chancellor who won a Nobel Prize in part due to his efforts in pushing his “Ostpolitik” brand of conciliatory policies toward the Communist East.

Calling on Pyongyang to respond to his proposal, Lee said it was the two countries’ ultimate task to usher in an age of “complete, verifiable, irreversible peace,” a reference to a phrase often used by U.S. officials to characterize Pyongyang’s denuclearization requirements.

Inter-Korean relations have all but ceased this year after Pyongyang escalated tensions with the South, owing to what it hinted was Seoul’s unwillingness to depart from a U.S.-led policy on sanctions toward the North.

As unification minister, Lee proposed using barter trades between the two Koreas as a means to build cooperation and trust, but Pyongyang has shown no response to the initiative.

Instead, Lee’s outspoken stance on the constraining influence of South Korea-U.S. relations on inter-Korean cooperation has irritated Washington.

In an awkward meeting with U.S. Ambassador Harry Harris last month, Lee openly called for the allies’ consultative body on North Korea policy to be revamped to accommodate Seoul’s independence in pursuing certain forms of exchanges with the North.

Another controversy was ignited last week when Lee remarked at a meeting with leaders of South Korea’s Protestant community that he believed Seoul and Washington could one day replace their “military, Cold War alliance” with a “peace alliance” down the road.

The U.S. State Department on Friday responded directly to the comment, stressing the two countries’ alliance went far beyond their security ties to include economic and human rights cooperation.

Moon Chung-in, special security advisor to South Korean President Moon Jae-in, on Monday said the State Department’s direct response to Lee betrayed Washington’s biased view of him, adding he could not understand why the United States was taking issue with the idea of a “peace alliance.”

Unification Ministry spokesman Yoh Sang-key also issued a formal response to the controversy, saying it was an “undeniable fact that the South Korea-U.S. alliance began as a military alliance in the Cold War, but developed into a value-shaped alliance on the basis of democracy and pursuit of a market economy.”