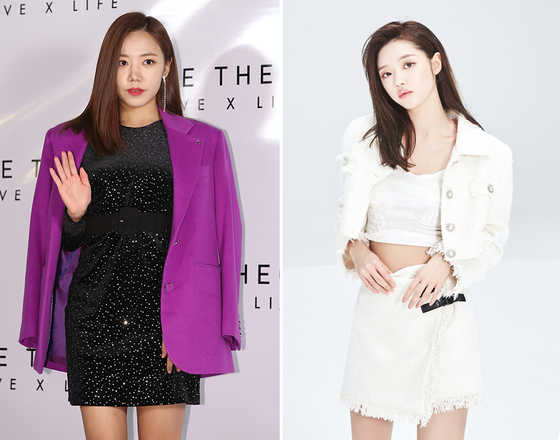 
YooA of girl group Oh My Girl and Kim Nam-joo of Apink will both make solo debuts on Sept. 7, kicking off the autumn season with girl power.

YooA, the main vocalist of Oh My Girl, will be releasing a solo EP on Aug. 7, marking not only her first solo release but also the first for any member of the group.

"YooA has been appearing on various television shows including music programs and entertainment programs to show herself to the public, and has been popular with her doll-like looks and mystical vibe," her agency WM Entertainment said.

The group released its first collaboration song with popular kids' animated character Pororo titled "Supadupa" on Aug. 16, with the message that it's okay to sometimes take it slowly.

Kim of Apink will make her debut with a single titled "Bird," announced her agency PlayM Entertainment with a teaser image showing the back of Kim wearing a white outfit with white nails.

"'Bird' is a song that carries Kim Nam-joo's will to love everything and fly toward her dream without faltering," the agency said.

Soyeon of girl group (G)I-DLE will collaborate on the new song, heightening expectations from fans of both groups.

Kim debuted in 2011 as the lead vocalist of Apink. She is popular among fans for her sense of humor.