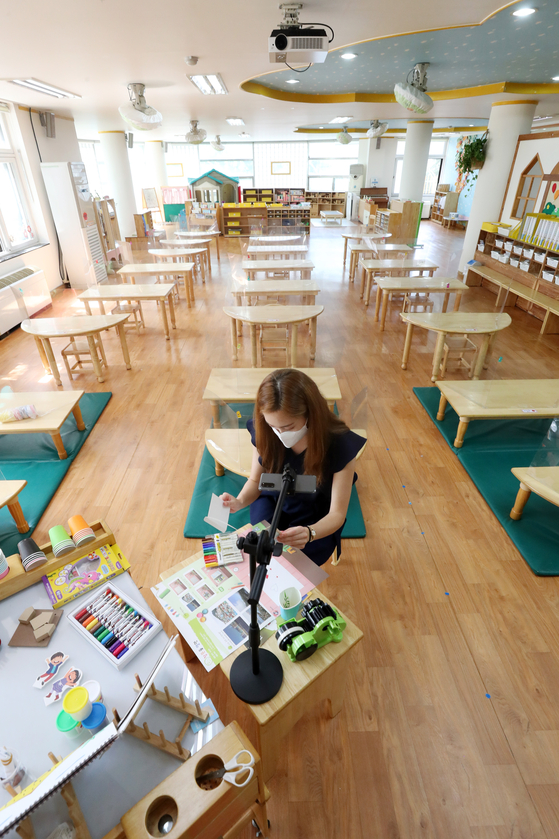 A teacher at a kindergarten in Suwon, Gyeonggi, Tuesday, prerecords an online class to show her students this week. The Education Ministry ordered all students from kindergarten through 11th grade in the greater Seoul area to remain home and engage in online learning from Wednesday to Sept. 11. [NEWS1]

All students in the greater Seoul area from kindergarten to 11th grade will go back to remote learning for the next two weeks as the coronavirus continues to spread throughout the country’s most populous region.

The Education Ministry said Tuesday that 12th graders will be spared from the latest measures as they have to prepare for the College Scholastic Ability Test (CSAT), the grueling eight-hour marathon known here as suneung, which students spend their whole school careers preparing for. The test is slated for Dec. 3.

The online learning mandate for students in Seoul, Incheon and Gyeonggi goes into effect Wednesday and tentatively lasts through Sept. 11, the ministry said, though the duration could be extended depending on the surge in cases.

The announcement came as Korea counted 280 new cases of the coronavirus on Monday, up from 266 cases the day before.

In explaining its latest measures, the ministry said in a statement that many students and faculty members were getting infected with the coronavirus lately despite the fact that the central government raised the social distancing level for the Seoul metropolitan area from Level 1 to Level 2 last week.

In order to prevent the area from going to the final Level 3, which will entail even greater restrictions on society, the ministry said it was appropriate for schools to act “pre-emptively” in taking “strong actions.”

Students will basically have to stay home for the next two weeks and take whatever online course they’re assigned to by teachers. If they need face-to-face guidance for a “basic course,” they can show up at school for in-person learning as long as they follow strict sanitation guidelines like wearing face masks at all times and keeping a distance from peers.

Schools for students with special needs or small schools in the suburbs that have 60 or fewer students can remain open for normal classes if there aren’t any clusters of coronavirus cases nearby, and if students, parents and faculty members agree with staying open, the ministry said.

The ministry continued that the so-called emergency child care program will continue to be offered to kindergartens and elementary schools so that households in which both parents work can drop off their kids.

Schools outside Seoul, Incheon and Gyeonggi won’t be affected by the online learning order.

The ministry already strongly recommended last week classrooms outside the greater Seoul area to run at no more than two-thirds of their full capacity until Sept. 11, while each local education office was given leeway to decide how to operate their schools. 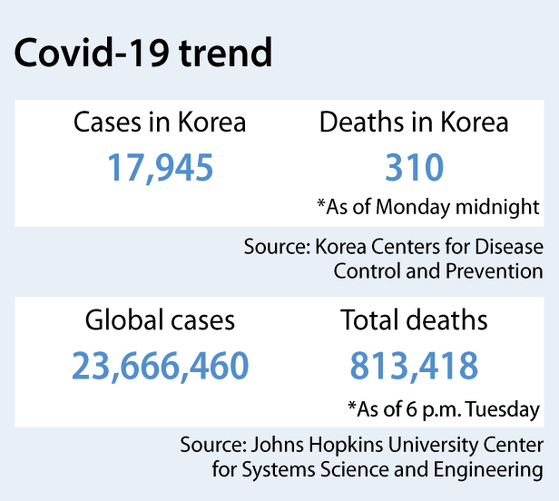 Across the nation Tuesday, at least 2,100 schools closed and didn’t offer any in-person classes due to surging cases of the coronavirus in their respective school districts, the ministry said, marking the first time that over 2,000 schools shut down since they were allowed to gradually reopen from late May.

As of Tuesday morning, a total of 307 students had been diagnosed with the coronavirus along with 74 faculty members — 22 more students and four more teachers than the previous day.

Among Monday’s local infections, 134 cases were reported in Seoul, 63 in Gyeonggi, 15 in Incheon, 10 in Daejeon, nine in South Chungcheong, eight in Gangwon, five in Daegu, four each in Gwangju and North Jeolla, three each in Busan, Sejong City and Jeju Island, two in South Gyeongsang and one in South Jeolla.

Among the 16 imported cases, seven were from the United States and one each from Bangladesh, Kazakhstan, the Philippines, Russia, Indonesia, Afghanistan, Switzerland, Ecuador and Bosnia and Herzegovina.

By Monday at midnight, Korea had counted 17,945 coronavirus patients in all, the 75th highest in the world.

A cluster emanating from the Presbyterian Sarang Jeil Church in Seongbuk District, central Seoul, reached 915 cases as of Tuesday noon, according to the KCDC, up 40 from a day earlier.

The hot spot from the antigovernment rally on Aug. 15 in Gwanghwamun, central Seoul, rose to 193 cases, 17 more than on Monday noon, all of whom are not members of the Sarang Jeil Church and presumably got infected while protesting on the streets or had contact with a protester.

A cluster at a Starbucks in Paju, Gyeonggi, totaled 66 cases, 25 of whom got infected while visiting the coffee shop around the same time as a Covid-19 patient on Aug. 8. The Yadang Station branch just opened last month with much fanfare as being Korea’s largest Starbucks store.

A new cluster emerged from an indoor gym in Suncheon, South Jeolla, this week, when at least 14 members received their positive test results Tuesday after a woman in her 40s, a member of the gym, first tested positive Sunday.

The woman didn’t wear a face mask while exercising at the gym and used the gym’s sauna recently, according to Suncheon officials, who expected the cluster to grow.

In Gwanak District, southern Seoul, 44 cases were traced to a sales business called Muhan Group on the sixth floor of the Yeongin MC Building, after an infected patient from Incheon visited the office for several days earlier this month. Nineteen of those cases were added in a single day from Monday noon, the KCDC said.

Minister of Health and Welfare Park Neung-hoo reiterated President Moon Jae-in’s grave warning that the central government could raise the social distancing level for the entire country from Level 2 to Level 3 if the public fails to comply with guidelines, saying social distancing was the “only vaccine” that could protect Korea from a further virus spread.

Park stressed this week will be a critical juncture in determining whether the nation goes to the final Level 3.