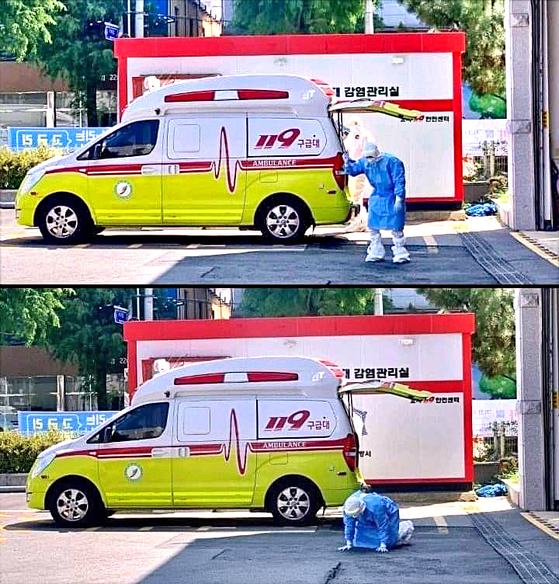 A medical professional sinks to the floor Sunday due to dehydration near a fire station in Jeonju, North Jeolla, as health authorities reported a new five-month high of daily coronavirus cases. [YONHAP]

Korea counted 397 more cases of the coronavirus Saturday, reaching a new five-month high as health authorities raised the social distancing level for the entire country to Level 2, forcing the closure of public institutions and businesses with high risks of transmission.

The Seoul Metropolitan Government separately handed down a face mask mandate for the public effective Monday, saying everyone in the capital must wear a mask when they're indoors — except "inevitable cases" such as when they're eating — and also when they're outdoors in a "packed" environment with other people.

Penalties weren’t mentioned by Acting Seoul Mayor Seo Jeong-hyup as he announced the face mask mandate during an online press briefing Sunday, but Seo urged everyone to respect the “social promise” to cover their mouths in public settings just like they’re currently doing on buses and subways.

Several other local government offices including Incheon, Gyeonggi and Daegu have put forth similar face mask requirements in recent days, warning that violators could face fines of 3 million won ($2,500) from mid-October following a two-month grace period.

A virus cluster that emerged on Aug. 12 at the politically controversial Sarang Jeil Church in Seongbuk District, central Seoul, quickly spread to all corners of the country on Saturday and Sunday as people who had contact with infected worshipers went on to transmit the virus to others.

A total of 324 new patients were counted on Thursday in Korea, 332 on Friday and 397 on Saturday, each breaking a five-month record from when the country counted 367 cases on March 7. The majority of recent cases were in the greater Seoul area encompassing Seoul, Gyeonggi and Incheon.

As for Saturday’s 397 cases, 387 were local infections, while the rest were imported cases, according to data from the Korea Centers for Disease Control and Prevention (KCDC). 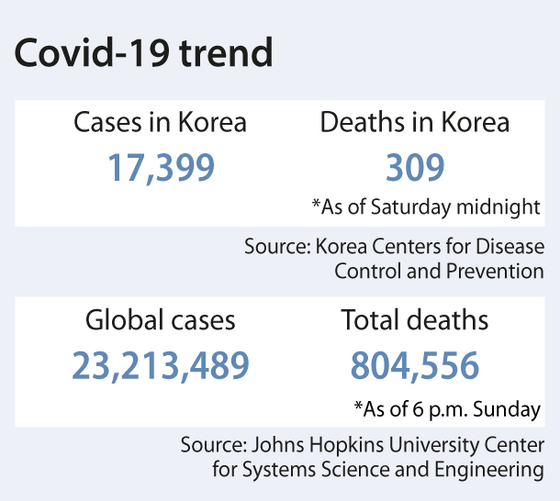 Zero cases were reported in Sejong City and Jeju Island, though both regions saw at least one new case on Friday.

Among the imported cases, two each were from Bangladesh, India and Vietnam, and one each came from the Philippines, Russia, Kazakhstan and Denmark.

In all, Korea’s total number of Covid-19 patients reached 17,399 as of Saturday at midnight.

The Sarang Jeil Church cluster reached 841 cases as of Sunday noon, according to the KCDC, up 45 from a day earlier. Of that figure, 792 people were identified as living in the greater Seoul area.

Another cluster at Woori Jeil Church, a Presbyterian church in Yongin, Gyeonggi, which has no known links to the Sarang Jeil Church, hit 180 cases.

The hot spot from the antigovernment rally on Aug. 15 in Gwanghwamun, central Seoul, which health authorities believe is connected to the Sarang Jeil Church, rose to 136 cases, all of whom aren’t members of the church and presumably got infected while protesting on the streets, or had contact with a protester. Thirty-six of those people live in Seoul, while the rest had traveled from other numerous parts of the nation.

KCDC Director Jung Eun-kyeong, whom for days pleaded with the public not to go out unless it’s an absolute emergency, said in a Sunday press briefing that Saturday’s case load of 397 will probably be topped by a higher figure soon, saying there were many people who haven’t gone through Covid-19 testing yet despite having contact with infected patients.

Health officials Saturday especially raised concerns about “traceless” infections, saying that in 20.2 percent of the last two week’s coronavirus patients, it could not be determined where or how they got infected. Authorities deem less than 5 percent of such cases to be an appropriate level.

Some 32 percent of the last two week’s patients were also aged 65 or older, who are generally considered to be at higher risk for severe illnesses from the coronavirus, officials continued. The Sarang Jeil Church is mostly attended by an older demographic.

Alarmed by the recent uptick in cases, Minister of Health and Welfare Park Neung-hoo declared in a public address Saturday that the three-tier social distancing level will be raised to Level 2 for the entire nation effective Sunday.

Gyms will generally be allowed to stay open under the condition they follow strict sanitation rules, but so-called GX programs, or “intense” group exercises such as Zumba, Tae-Bo and Spinning will be banned.

High-risk businesses were given a single-day grace period to close, by Monday.

All sports, including football and baseball, will go back to the no-spectators rule. Public institutions such as museums and libraries will close. Civil servants will work on staggered schedules, while private companies will be recommended to space out their employees as well.

Violators can face fines of 3 million won and criminal charges.

Compulsory measures in the Level 2 system will be recommendations without enforcement for North Gyeongsang and Gangwon, officials said, given the less serious virus situation.

Over the weekend, the Ministry of Oceans and Fisheries also announced that all beaches across the nation will close. While people will still be allowed to visit them, amenities such as shower booths, changing booths, parasols and water tubes won’t be offered, the ministry said. Safety agents will remain on patrol to prevent any activities prone to trigger a virus spread.

At the Foreign Affairs Ministry in Gwanghwamun, a civil servant and a janitor each tested positive for the coronavirus over the weekend, marking the first time that the annex of the Central Government Complex in Seoul — where the ministry is located — saw infections.

They were separately infected, each by their spouses.

In Paju, Gyeonggi, a mom, dad and daughter were all infected by the mother’s parents, who participated in the Aug. 15 antigovernment rally. So was a family of five in Cheongju, North Chungcheong.