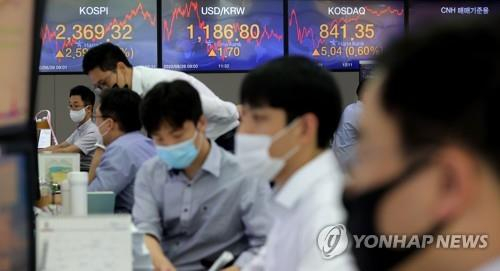 A screen shows the closing figure for the Kospi in a trading room at Hana Bank in Jung District, central Seoul, on Wednesday. [YONHAP]


Shares closed nearly flat on Wednesday as investor sentiment was spooked by increasing Covid-19 cases in the country. The won fell against the dollar.

Trading volume was high at about 941 million shares worth some 14.3 trillion won ($12 billion), with losers outnumbering gainers 522 to 324.

Daily new Covid-19 cases in Korea bounced back to over 300 amid a nationwide epidemic.

Health authorities said they would have to raise the social distancing scheme to the highest Level Three from the current Level Two if the numbers do not flatten this week.

Under the strongest antivirus curbs, gatherings with 10 or more people are banned, and restrictions are imposed on schools, cafes, movie theaters and wedding halls.

"The Covid-19 toll is highly likely to affect the local stock index for a while," said Kiwoom Securities analyst Seo Sang-young.

The local currency closed at 1,186.8 won against the dollar, up 1.7 won from the previous session's close.

Go ahead, take my biometric data, many Koreans say