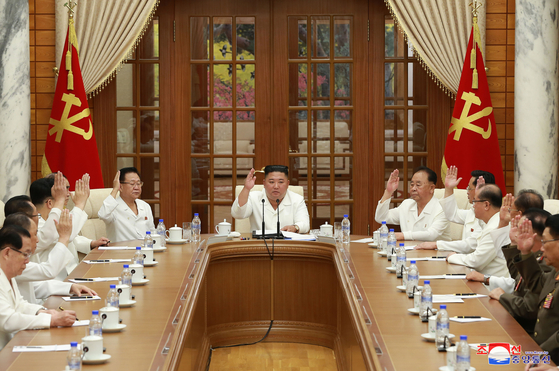 According to the official Korean Central News Agency (KCNA), Kim presided over an enlarged meeting of the political bureau of the North’s ruling Workers’ Party Central Committee to discuss implementing “thorough state emergency measures” to prevent expected damage from the storm.

Kim particularly stressed the need to minimize agricultural damage, calling the task a “crucial” one to determine the success of this year’s crops.

Carrying gusts reaching over 126 kilometers per hour (78 miles per hour) that South Korea’s meteorological agency said could make it one of the strongest storms to hit the country on record, Bavi is expected to make landfall in the North’s South Hwanghae Province on Aug. 26, before moving northwards through South and North Pyongan Provinces.

Those areas are also the North’s breadbasket provinces, which were heavily damaged after intense rains caused floods and landslides across the Korean Peninsula earlier this month. According to statistics revealed at a Politburo meeting on Aug. 13, the rains damaged over 390 square kilometers (151 square miles) of farmland and affected over 16,000 households.

The downpours aggravated what is already shaping up to be the worst crisis the North Korean economy has faced in decades, owing to a stifling combination of international sanctions and the trade crunch stemming from the coronavirus pandemic.

With a chronically malnourished population that United Nations experts say could number over 10 million, the regime may likely face another major food shortage if the storm proves to be as devastating as projected to its agricultural heartlands.

When Typhoon Lingling hit in 2014, North Korea reported flooding or damage to around 460 square kilometers of farmland, as well as to hundreds of houses across the country.

Though recovery work from the rains still appears to be underway, the official party newspaper — the Rodong Sinmun — on Wednesday called for a variety of steps to prevent the coming typhoon from further flooding farmlands, such as digging irrigation ditches.

Testifying to the sense of urgency within its leadership, Pyongyang has convened enlarged Politburo meetings a total of seven times this year — twice alone in August — in contrast to prior years when such gatherings were few and far between.

The KCNA reported the meeting also dealt with “some defects in the state emergency antiepidemic work,” hinting at continued difficulties with the regime’s response to Covid-19.

It remains unknown how far the contagion has spread within the isolated regime, which has been officially claiming to have had zero cases. Strict quarantine measures like frequent health checks and movement restrictions remain in place across the country.

Proper enforcement of such measures, however, appears to be a different story. In an editorial from July 31, the Rodong Sinmun called out several workplaces and hospitals for failing to follow health guidelines, like maintaining supplies of disinfectants and requiring workers to wash their hands thoroughly.

In the Politburo meeting, Kim cited “facts about some shortcomings” with the antiepidemic work as he ordered measures be taken to “eliminate” such defects, the KCNA said.