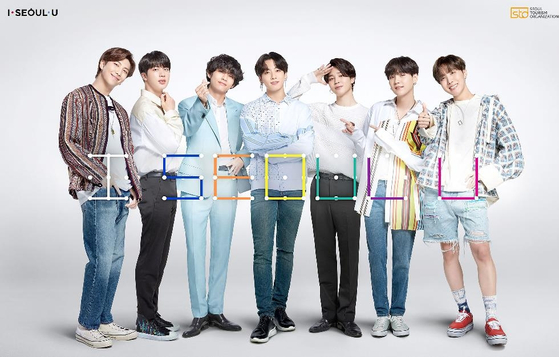 BTS has been the honorary tourism ambassador for Seoul city for four years since 2017. [SEOUL TOURISM ORGANIZATION]

Boy band BTS, which topped the Billboard Hot 100 singles chart with its latest single “Dynamite,” will present a promotional tourism video "See You in Seoul" on Sept. 11, the Seoul Tourism Organization announced on Thursday.

"We hope that BTS's promotional video will be a big help at a time when the tourism industry has been greatly affected by the Covid-19 pandemic,” an official of the Seoul Tourism Organization said.

While details of the promotional video are yet to be disclosed, it will be approximately 90 seconds long and will be released simultaneously worldwide on Sept. 11 through the Seoul Tourism Organization’s official website, VisitSeoul, its YouTube channel, Facebook and Instagram.

Ahead of the release, the organization and the Seoul Metropolitan Government will produce a series of countdown videos that will be released at 5 p.m. every day from Sept. 4 to 10 on the organization’s official Facebook and Instagram.

"We produced a video that sends support to those suffering from the Covid-19 crisis, to overcome difficult times together,” Hong Jae-sun, global marketing team director of the Seoul Tourism Organization, said.

BTS, which has been the honorary tourism ambassador for Seoul city for four years since 2017, also released a promotional video, “Live Seoul Like I Do,” last year which introduced Seoul as a city where tradition and urban values coexist.