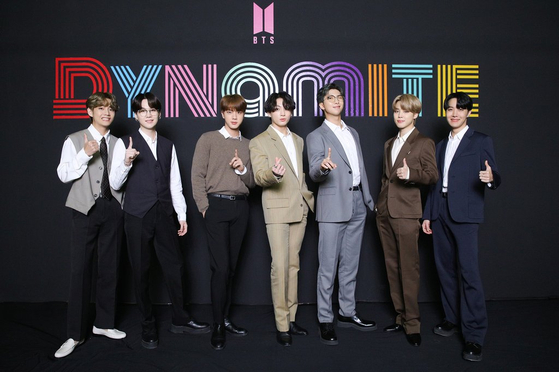 
BTS has continued its success on the Billboard Hot 100 chart for a month with its English-language single “Dynamite,” remaining at the No. 2 position of the chart’s update made on Tuesday.

The group’s latest single released on Aug. 21 ranked second on the Billboard’s Hot 100 singles chart, the same as last week, according to Billboard.

"Dynamite" topped the Hot 100 for the first time in Korean pop music history in the first week of its release, and also stayed at the top for two consecutive weeks.

While previous songs released by BTS have fallen significantly over the weeks, "Dynamite" is becoming a long-term hit,  remaining in the first and second place for a month.

The Hot 100 is a weekly chart that ranks the most popular songs in the United States by taking streaming, music sales and radio airplay into account.

This week's Hot 100 was topped by Cardi B and Megan Thee Stallion’s “WAP.”

According to Billboard, “Dynamite” recorded 1.26 million streams in the United States in its fifth week of the release from Sept. 11 to 17, down 5 percent from the previous week.

Downloads fell 43 percent from the previous week, but recorded a high record of 78,000, continuing to dominate Billboard’s digital song sales chart for the fourth consecutive week.

“Dynamite” also ranked 47th on the radio songs chart — a two-step increase from last week’s entry —  which measures the airplay of songs across all musical genres throughout the United States.