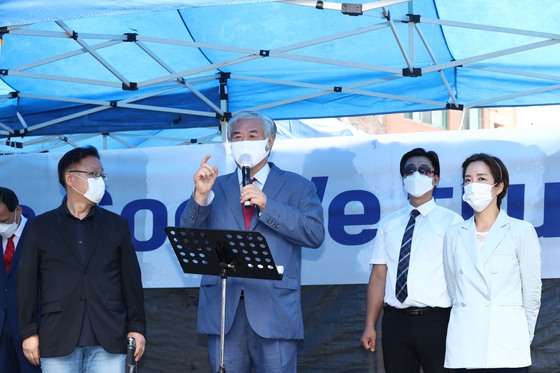 Rev. Jun Kwang-hoon, pastor of the Sarang Jeil Church, slams President Moon Jae-in Wednesday morning in front of his church in Seongbuk District, central Seoul, shortly after being discharged from the hospital for coronavirus treatment. [NEWS1]

Rev. Jun Kwang-hoon, the politically controversial pastor at the center of Korea’s second-largest coronavirus outbreak, slammed President Moon Jae-in Wednesday morning as he was discharged from the hospital for virus treatment, accusing Moon of scheming to sabotage him and his congregants.

Jun — a scathing critic of Moon who had led numerous antigovernment rallies against the president in Gwanghwamun, central Seoul — blamed Moon for bringing the “Wuhan virus” into Korea, and said he and his administration had tried to “wipe out” Jun and his church by accusing them of spreading the virus in local society.

That plot, however, “failed due to the public’s wise decision,” according to Jun.

By Wednesday at noon, the Sarang Jeil Church cluster had reached 1,117 cases, according to data from the Korea Centers for Disease Control and Prevention (KCDC).

Jun also participated in the anti-Moon rally on Aug. 15, which was joined by some 20,000 people, mostly older conservatives from across the nation. Among those participants, health authorities believe over 600 were either members of the Presbyterian church or had recently visited it.

During Wednesday’s press conference, Jun criticized Moon for “denying the country” by refusing to acknowledge 1948 as the nation’s year of foundation, saying he would give Moon one month to “apologize” to the general public about his denial.

If Moon doesn’t apologize, Jun said he was willing to “give up” his life.

“I’m determined to die a martyr,” Jun warned, without elaborating.

Moon and many other liberals tend to view modern Korea’s foundation year as 1919, when a provisional government was established in Shanghai. Conservatives trace the year to 1948, when Syngman Rhee was elected as the first president of the Republic of Korea.

Shortly after Jun’s press conference, when asked by Blue House correspondents about the pastor’s threat, a senior Blue House official who spoke on the condition of anonymity accused Jun of deflecting blame for causing more than 1,000 infections, saying his “conspiracy theories” about the government’s measures to prevent the spread of the virus were creating “a catastrophic aftermath.”

“Other Christian pastors who had been silently spreading love to their neighbors are also suffering harm.”