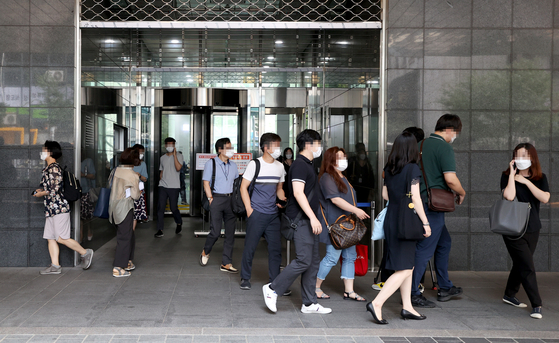 Civil servants at the main Seoul City Hall building in Jung District, central Seoul, evacuate Wednesday afternoon after a worker on the second floor tested positive for the coronavirus. [YONHAP]

At least 10 people from across the nation are believed to have contracted the coronavirus while attending last week’s antigovernment rally in Gwanghwamun, central Seoul, health authorities said Wednesday, ringing alarm bells of a possible community spread.

Some 20,000 people are estimated to have joined the demonstration, mostly older conservatives.

Officials said the 10 infected people are not members of the Sarang Jeil Church in Seongbuk District, central Seoul, where a burgeoning cluster reached 623 cases by Wednesday noon.

Exactly how the 10 protesters were infected was not immediately known, but health authorities strongly suggested Sarang Jeil Church adherents may be responsible, since at least 10 followers participated in the rally before testing positive.

The Korea Centers for Disease Control and Prevention (KCDC) said in a statement Wednesday that fears of the Sarang Jeil Church worshipers infecting others at the protest have “become a reality,” strongly urging anyone who took part in the demonstration to get tested immediately, even if they’re not feeling any symptoms.

“There’s just so many people getting infected [lately], and we have to meet each quarantined patient face-to-face to ask questions [about where they went and who they met], so an in-depth investigation [into the 10 cases] will take some time,” said KCDC Deputy Director Kwon Jun-wook.

The first of these cases was detected Tuesday. All 10 people voluntarily went to testing sites to be examined, health officials said.

Authorities didn’t say how many members of the Sarang Jeil Church went to the anti-Moon Jae-in protest, but Rev. Jun Kwang-hoon, the church’s head pastor, was there before he tested positive on Monday.

Among the 10 who were infected at the rally was former lawmaker Cha Myeong-jin of the Saenuri Party, the predecessor of the main opposition United Future Party. Cha has no known links to the Sarang Jeil Church. A North Korean defector in her 50s was also diagnosed with the coronavirus after traveling from her home in Cheongju, North Chungcheong. So was a woman in her 60s, who traveled from Chuncheon, Gangwon, and two people from Daejeon.

The Seoul Metropolitan Government and several other local government offices relayed administrative orders mandating everyone in their constituencies who joined the Aug. 15 demonstration get tested, warning violators could be fined 3 million won ($2,500).

About 7,600 police officers who were dispatched to the protest for crowd control are being tested as well. 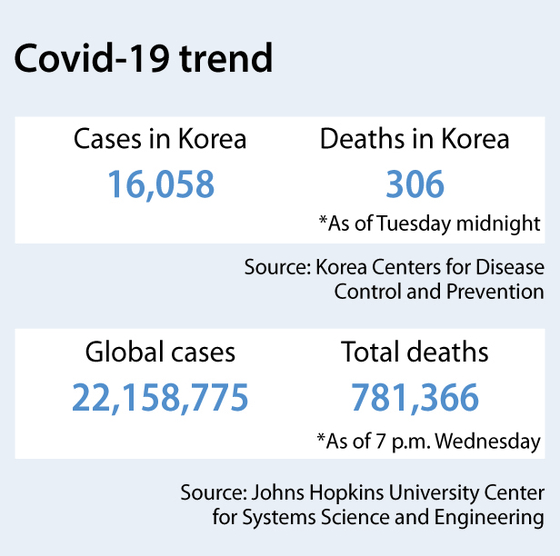 Tuesday’s case load of 297 Covid-19 patients was Korea’s highest daily infection figure in over five months, as the virus continues to spiral out from the Sarang Jeil Church ever since the first patient there was detected on Aug. 12.

Fourteen cases were imported: four from the United States, three from Kazakhstan and one each from Uzbekistan, the Philippines, Indonesia, the United Arab Emirates, Russia, France and Spain.

In all, Korea’s number of Covid-19 patients reached 16,058 as of Tuesday at midnight.

Among the latest buildings to shut down after detecting a coronavirus infection was the Seoul Metropolitan Government’s main City Hall building in Jung District, central Seoul.

The Seoul government office said Wednesday afternoon that a civil servant who works on the second floor tested positive that day. He left work early at around 3 p.m. the day before, complaining of symptoms. He didn’t come to work last Saturday through Monday, and the office said contact tracing was underway.

While health authorities are trying to test some 4,000 people who recently visited the Sarang Jeil Church or are officially registered as adherents, officials said Wednesday morning that 3,275 people had been tested so far, while the rest are either undergoing testing procedures, couldn’t be reached, or are refusing to be tested, claiming they aren’t members of the church.

Vice Minister of Health and Welfare Kim Gang-lip once again urged everyone on the list to be tested as quickly as possible during a press briefing, saying nearly 40 percent of all patients connected to the church were in their 60s or above, which is considered a “high-risk group” in coronavirus treatment.

The Seoul Metropolitan Government blasted the church for hampering contact tracing efforts by submitting a redacted list of their adherents, saying Wednesday it would launch procedures to seek damages. The office didn’t relay a specific amount, but said “legal” discussions on the matter have begun.

As coronavirus cases in the capital continue to soar, reaching the highest-ever figure on Tuesday with 150 cases, Acting Seoul Mayor Seo Jeong-hyup vowed to create a coalition comprising the chiefs of 15 hospitals in Seoul in order to streamline talks on hospital beds and Covid-19 treatment. Seo said the city was trying to secure more hospital beds for critically and severely ill patients, and promised to open at least two new government-run treatment facilities for patients with lighter symptoms.

Meanwhile, the Ministry of Education said Wednesday that 65 students and nine teachers across the country attending kindergarten through high school tested positive for the coronavirus from Aug. 11 to 17. Nationwide schools were strongly recommended to space out their students by running their classrooms no more than two-thirds of full capacity until Sept. 11.

Kindergarten through middle schools in the greater Seoul area had previously been required by the ministry to operate on one-third of their capacity through Sept. 11, while high schools were told to run on two-thirds.