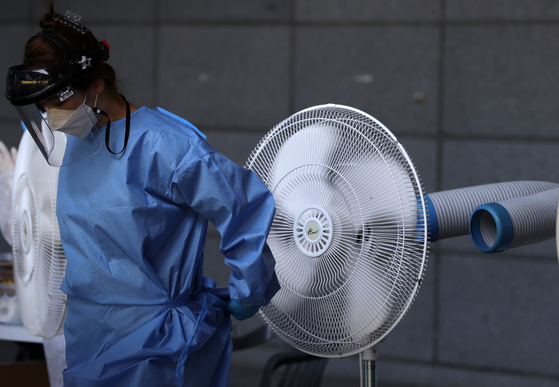 A medical staffer cools off at a Covid-19 testing site in Jeonju, North Jeolla, Thursday, as the coronavirus spreads. [NEWS1]

At least eight more people who attended a big anti-Moon Jae-in rally in downtown Seoul last Saturday contracted the coronavirus, health authorities said Thursday, as they scramble to track down some 20,000 people who took to the streets.

Officials said all eight protesters are not members of the Sarang Jeil Church in Seongbuk District, central Seoul, which is responsible for a staggering cluster that reached 676 cases by Thursday noon. The cluster added 53 more cases in 24 hours.

In all, a total of 18 people who participated in the Aug. 15 antigovernment demonstration and aren’t members of the Sarang Jeil Church were infected with the coronavirus as of Thursday noon.

Nationwide, 288 coronavirus cases were newly detected Wednesday, nine fewer than the day before, according to data from the Korea Centers for Disease Control and Prevention (KCDC).

While contact tracing on the protesters continues, health officials strongly suggested they may have been infected by worshipers of the Sarang Jeil Church, a politically controversial Presbyterian church led by a vocal critic of President Moon, Rev. Jun Kwang-hoon.

Health officials aren’t sure exactly how many worshipers from the church joined the rally in Gwanghwamun, central Seoul — even as a cluster was escalating in their religious community — but at least 33 people with links to the church, mostly followers or acquaintances who had close contact with them, have been found to have participated in the demonstration before testing positive this week.

As for the 18 protesters unrelated to the church, the KCDC said five had traveled from North Gyeongsang to attend the rally, four from Gyeonggi, two from Busan and one each from Incheon, North Chungcheong and South Chungcheong. The other four live in Seoul.

In terms of age, all but one is in their 50s or above, including 13 who are in their 60s or above, which are generally considered to be at higher risk for severe illness from the coronavirus.

At least three police officers in Seoul dispatched to the protest for crowd control have also tested positive, officials noted. Some 7,600 officers who were at the scene are all undergoing tests.

The Seoul Metropolitan Government and several other local governments have issued administrative orders mandating everyone in their constituencies who joined the demonstration get tested, warning violators could be fined 3 million won ($2,500).

The Seoul government said Thursday that any demonstration involving 10 participants or more will be strictly prohibited in the capital from Friday to Aug. 30 midnight, stressing that anyone who disobeys the order will be reported to police for criminal prosecution. 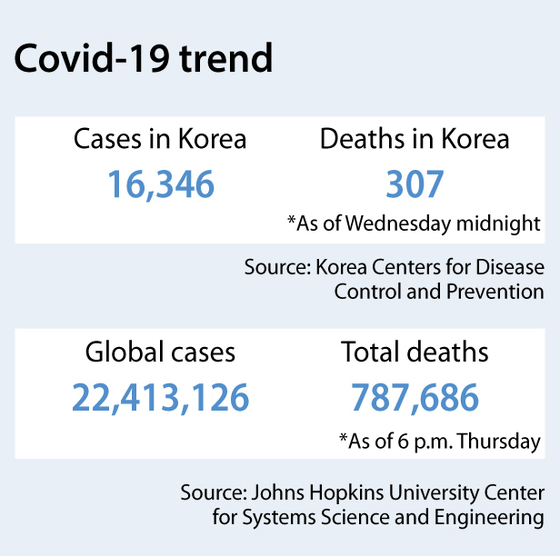 Most of Wednesday’s case load of 288 was from Seoul and Gyeonggi, as patients infected from the Sarang Jeil Church continue to spread the disease in their local communities and workplaces — 135 people live in Seoul; 81 in Gyeonggi; 15 in Busan; eight in Daejeon; five each in Gangwon, North Jeolla and North Gyeongsang; four in South Chungcheong; two each in Daegu, South Jeolla and South Gyeongsang; and one each in Gwangju and North Chungcheong.

The only major cities or provinces that didn’t detect any new patient Wednesday were Ulsan, Sejong City and Jeju Island.

Twelve cases were imported: three from the United States; two each from Kazakhstan and Ukraine; and one each from the Philippines, Canada, Brazil, the Czech Republic and Moldova.

In all, Korea’s total number of coronavirus patients reached 16,346 as of Wednesday at midnight, the 76th highest in the world.

The Sarang Jeil Church cluster is the second largest Covid-19 cluster Korea has seen, second to the cluster from the Shincheonji Church of Jesus in Daegu, another controversial Christian sect that tallied 5,214 cases in February and March.

The Woori Jeil Church in Yongin, Gyeonggi, another Presbyterian church where a cluster first emerged last week, reached 165 cases by Thursday noon, 131 of whom are church members. The rest have been classified by the KCDC as relatives or acquaintances.

No links have been found between the Woori Jeil Church and the Sarang Jeil Church, though health officials have left the possibility open, in light of the fact that the first patients in each cluster were diagnosed with the coronavirus around the same day.

A recent hot spot that’s seizing the attention of education authorities is one in a physical education hagwon, or private cram school, in Seongbuk District where at least 16 students have tested positive by Thursday noon.

Seongbuk District is where the Sarang Jeil Church is located, though contact tracers have yet to find any links between the two clusters yet. The first patient in the cluster tested positive Tuesday, and the rest received their results the next day.

The Education Ministry said the vast majority of the students are high school seniors who live in Seongbuk District or Gangbuk District, northern Seoul, and attend 11 different schools in the area, most of which had been on summer break when the students turned out positive.

The students were preparing for a physical test to get in to a sports-related department in college.

By Thursday morning, a total of 714 schools reported to the ministry that they weren’t holding any in-person classes that day, up 25 from the day before. Most of these schools are in Seoul, Gyeonggi and Busan, the ministry said.

Forty students nationwide tested positive for the virus Wednesday, and so did 10 faculty members.

Schools had been planning to hold regular class schedules in the second semester, but those hopes were dashed when the Education Ministry on Wednesday strongly recommended all classrooms run at no more than two-thirds of their full capacity until Sept. 11.

Kindergarten through middle schools in Seoul, Incheon and Gyeonggi were required to operate at one-third of their capacity through Sept. 11, while high schools were told to run at two-thirds.