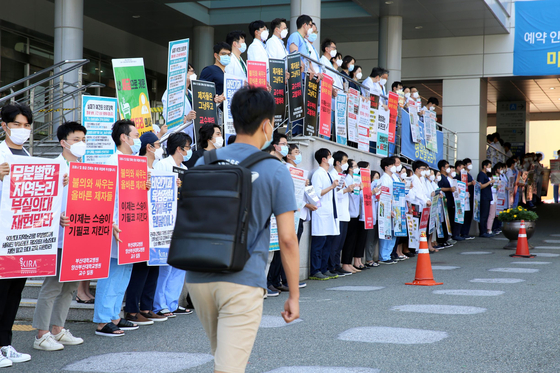 
Doctors’ groups reached a joint agreement Thursday, taking a step toward dialogue with the ruling Democratic Party (DP) and the government to end their strike in protest of medical reform policies.

A task force comprising the Korea Medical Association (KMA), at the forefront of the protests, and a young doctors' emergency response committee, representing interns, residents and fellows, held a closed-door meeting to come up with a unified position representative of the medical community.

Kim Dae-ha, a KMA spokesman, told reporters that the association reflected demands of junior doctors who have been most active in the collective actions in their agreement.

“We will begin talks with the government and National Assembly with our list of demands at an early date,” he said, adding that the agreement will "facilitate talks between the medical community, government and the ruling party.”

The doctors’ agreement comes as trainee doctors have been on strike for some two weeks after the Korean Intern Resident Association (KIRA) staged a walkout on Aug. 21.

The KMA, representing some 130,000 doctors, likewise still has plans for a third general strike starting next Monday, while young doctors have tendered resignations en masse over the past week, many with the support of senior doctors at major hospitals amid a spike in local coronavirus cases.

Rep. Han Jeoung-ae, chair of the DP’s Policy Planning Committee, earlier this week indicated the party is willing to restart policy discussions from square one. Doctors’ groups have objected to the government’s plans to expand medical school admissions and establish a public medical school, among other measures to expand rural health care coverage.

The doctors’ task force and the DP were said to be working on an agreement that may suspend the governmental plan to increase the medical school admissions quota.

The government, which has initially been adamant in its medical reform package, has said it is willing to respect a decision reached by the National Assembly and doctors amid the ongoing spike in coronavirus cases that has strained hospitals.

A dozen civic groups held a press conference in front of the Seoul National University Hospital in central Seoul on Thursday urging trainee doctors to return to their hospitals and accusing senior doctors of inflaming their juniors.

They noted that as doctors in charge of public health care, the government's medical policy is “contradictory.”

President Moon Jae-in also faced backlash from opposition parties and even from the public for allegedly attempting to create a rift between doctors and nurses after issuing a message on Wednesday to support nurses.

Moon in a Facebook post Wednesday expressed his deep gratitude to nurses for their efforts for silently safeguarding the medical scene “after the departure of trainees and doctors.” He noted that nurses had been “shouldering the burden of the doctors” who went on strike amid the coronavirus pandemic.

The remarks were seen as a jab at doctors.

Some nurse groups even responded negatively to Moon’s remarks.

“We are grateful for your recognition of the hard work of nurses," wrote Korean Young Nurses in a statement posted on its Facebook page Wednesday. "However, if there is a dire need of medical personnel, then please properly protect the current medical personnel.”

They added that the nurses’ poor working conditions and emotional labor “did not suddenly occur because of the doctors’ collective action." Likewise, they said that increasing the number of nurses, or dispatching more nurses to rural areas will not alleviate their current difficulties. 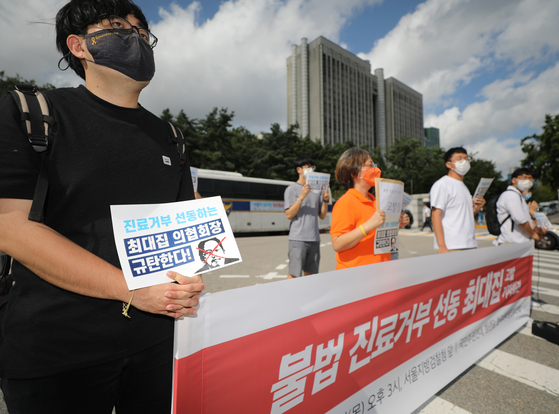