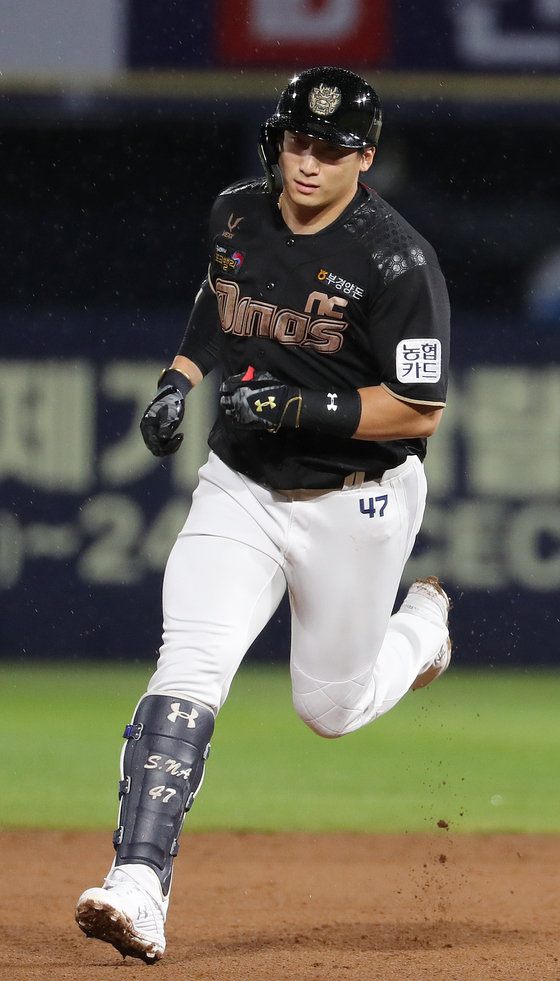 Na Sung-bum of the NC Dinos rounds the bases after hitting a two-run home run during a game against the Hanwha Eagles at Changwon NC Park on Aug. 26. [YONHAP]


Na Sung-bum of the NC Dinos has overcome his knee injury and returned to explosive form this season.

Heading into the 2019 season, there were high expectations for Na, who had mentioned his interest in potentially heading to the majors. That dream wasn't to be, as Na spent almost the entire season out with a knee injury that forced him to undergo surgery.

Due to this, Na’s 2019 season was all about rehabilitation. There were questions regarding his return to the KBO this year, but as it turns out, there was no need for concern.

Having made it onto the Dinos’ starting entry since the season opener on May 5, Na has appeared in all 89 games as of 6 p.m. on Thursday.

Looking at Na’s performance, it's as if nothing ever happened. Although the knee is an area where there is a high possibility of repeat injury, Na seems to have rehabilitated very well. So far this season, he has a 0.320 batting average with 84 RBIs and 27 home runs.

Thanks to Na’s performance, the Dinos now have a bit of breathing room at the top. Until Aug. 25, the Dinos maintained the top spot in the regular season standing by just half a game, with the Kiwoom Heroes hot on their heels.

The Dinos started to pull ahead last week, when Na was dominant with a 0.462 batting average, five home runs and 15 RBIs throughout six games.

Below are edited excerpts from an interview with Na.


Q. Looking at your performance last week, you managed to hit four winners. How do you feel?

A. I feel great about the fact that I played a great role in clutch situations. I normally get assigned as the third batter in the lineup and the batters in front of me get on base well.

Since [infielder Park] Min-woo and [outfielder Lee] Myung-ki are batting well, I get to have at-bats when we have runners in scoring position. I think I’m benefiting a lot from my teammates.


Q. You are very consistent with your batting. What’s the key behind that consistency?

A. After about 300 at-bats, my batting average doesn’t really go up or down. Before reaching 300 at-bats, my goal is to add 100 hits. When I wasn’t batting well, I started to have one too many thoughts. But at one point, I started to think and tell myself to be thankful for being able to play, without getting injured.

I thought that if I started working hard with the mindset I had back when I was a rookie, then the results would come along. Once I’ve done that, I was making great hits.


Q. For the first time since the Dinos joined the KBO, you guys have a shot at winning the regular season or the Korean Series. Do you feel a heavy burden on your shoulders?

A. There are a number of veterans like [catcher Yang] Eui-ji and [infielder Park] Sok-min behind me [in the batting lineup]. So I get into the batters box without pressure. I’m enjoying every time I’m at bat.

Since baseball is a team game, we can’t just win by having one person, myself, play well. I’m sure the other players are well aware of this. We’re not that far ahead of the second-ranked team, so we can’t let ourselves relax.


Q. You’re getting assigned as designated hitter this season, but you’re still managing to keep your batting at its best. How are you keeping that up?

A. At first, it was hard to make the adjustment, because designated hitters would walk back to the bench and rest until the next at-bat. I was struggling with the timing as to when I should start warming up again, but I got a lot of help from our batting coach Lee Ho-joon. Since he has quite some experience playing as a designated hitter, he gave me some tips.

A. Since we’re allowed to use our indoor training facility when we’re playing at home, [until I’m at-bat] I can do some light running. I can also work on my batting. This definitely allows me to warm up better than the other batters.

In away games, I just look for a wide space and practice my swing. Until my next time at-bat, I watch the game from the dugout and think about how I’m going to bat.


Q. You had a long period of rehabilitation last year. How did you spend that time?

A. I focused so much on rehabilitation training that I didn’t have time to think about other things. I think I only thought about how to condition myself to make my comeback.


Q. You started the season with a home run in the first game against the Samsung Lions on May 5. How did you feel?

A. I was in a daze. I was batting great balls without even noticing it. I couldn’t believe it.


Q. You seemed to have changed the location of your hand when batting. When did you make the adjustment?

A. I’ve been working on it since last season. [After the knee injury,] I gave myself some time to work on my form. When you play through each season, it’s hard to maintain the same form because you make little changes when you’re not batting well. But now, it’s helping me. I hit concisely.


Q. What do you think you need to improve on?

A. I would say my ratio of walks to strikeouts.


Q. Looking at your stats, your strikeouts actually increased. What happened?

A. Every year, when I see the number of strikeouts, I have a lot of thoughts going through my head. But it’s not something I can fix easily. When I try to fix that, I worry about losing my strength. I believe that everyone can have their weaknesses. So I focus on maximizing my strengths. I think it’s better to improve on the number of home runs or other areas.


Q. What is your goal for the remainder of the season?

I hope to finish this season without any injuries.