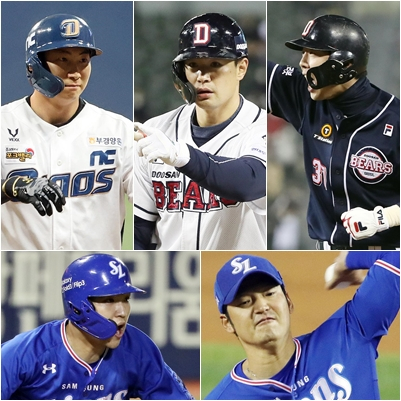 
The KBO on Monday announced the list of players who qualify for free agency this year.

The 19 players on the list have until Wednesday to decide if they want to opt for free agency. The KBO will then announce the final list of free agents on Thursday, and teams will be free to begin signing players from Friday.

The Doosan Bears, KT Wiz and Lotte Giants all follow with three possible contenders each.

The LG Twins have two possible free agents, but both are big names in the Seoul club’s lineup — Kim Hyun-soo and Seo Geon-chang.

The NC Dinos, Kia Tigers and Kiwoom Heroes each have one potential free agent — Na Sung-bum for NC, Na Ji-won for Kia and Choi Jae-hoon for Kiwoom — and the SSG Landers have no possible free agents.

Only five of this year’s potential free agents have been categorized in the KBO’s “A” category for the top potential candidates — Kim Jae-hwan, Park Kun-woo, Park Hae-min, Seo Geon-chang and Na Sung-bum — with the spread across multiple teams suggesting that this year’s is likely to be a relatively quiet free agent market with no major losers.

The KBO free agent market has been fairly dramatic in recent years. In 2019, a total of 24 players were eligible for free agency, while last year the Bears alone had seven players opt for free agency.

Doosan had to dig deep last season to keep four of those players, a somewhat uncharacteristic move for the normally thrifty club.

This year’s market looks set to be significantly less dramatic, with no team scrambling to hold on to such a large number of players.

NC’s Na Sung-bum could provide some intrigue this year, as the slugger may try posting to the major leagues again. Last year Na made a bid to move to the majors, but failed to land a contract within the posting period. The KBO announced earlier this month that they have received a status request for Na, the very first step toward a possible move to the United States.