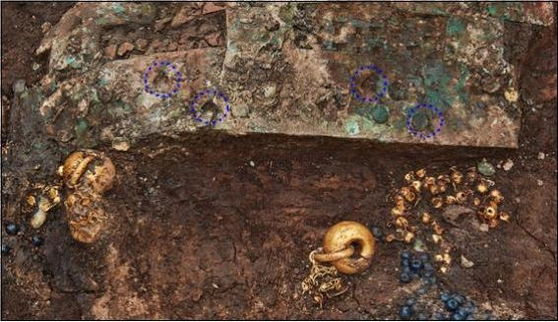 A set of earrings found from Hwangnamdong Tumulus 120-2 in Gyeongju. [YONHAP]


The plethora of luxurious accessories, buried underground for some 1,500 years, is the main clue that this person buried in a grave in Gyeongju either belonged to a royal family or was a prestigious aristocrat.

While the body has decayed, a gilt-bronze coronet with gold earrings, a silver belt, a silver bracelet and silver ring have not. Gilt bronze shoes remain where the feet would have been.

This excavation began in May when a pair of golden shoes were discovered, the 13th of their kind from a grave from Silla Dynasty (57 B.C. to A.D. 935).

From Hwangnamdong Tumulus No. 120-2, all kinds of accessories that are believed to be from the sixth century were discovered. The location of the accessories indicates that all of them were worn by the person that was being buried.

It is the first time since the excavation of Hwangnam Daechong, from 1973 to 1975, that a collection of different jewelry and accessories has been found all together at the same time at the grave in the Gyeongju area. It is also the first time to find a body that was apparently buried while wearing shoes. 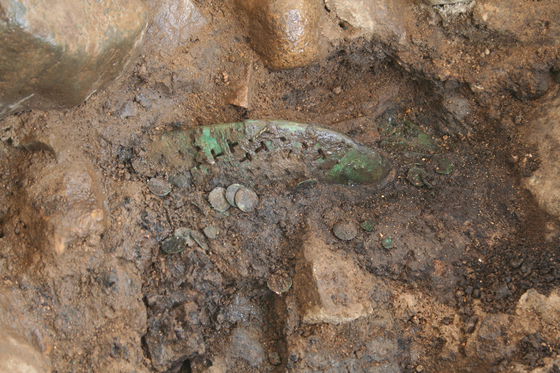 
“Since May, we have conducted a detailed investigation on [the area] and we found [women’s] earrings where it seemed ears must have been located,” said Kim Kwon-il, senior researcher of Foundation of Silla Cultural Heritage Research Institute. He also added that previous finds from the grave like a bronze iron or loops to a spinning wheel adds to the likelihood that the deceased was a woman.

Professor Lee Han-sang of Daejeon University who majored in accessories, also believes the person is a woman because no large sword was found, unlike in the graves of men. Instead, small decorative knives were found around the waist, which he takes as a woman's.

The fact that there was a gilt-bronze coronet means that this person used to have a high social status. The coronet is very flamboyant and features carved decorative patterns.

It is the first time for a coronet to be found with some decorative holes, the investigative team said. The shape of this coronet has never been seen before and there is a need for further investigation to see if this hat is a decorative item, or an item that signals the social position the buried had held.

At the sides of the silver belt were silver bracelets. It seems like the deceased also wore beaded bracelets given that more than 500 beads, measuring about 1 millimeter (0.04 inches), were found.

Five silver rings were found on the right hand while one was found on the left. It is said there’s a possibility that more silver rings will be excavated if the team goes further with its investigation. This means there is a chance that the buried wore a ring per finger. 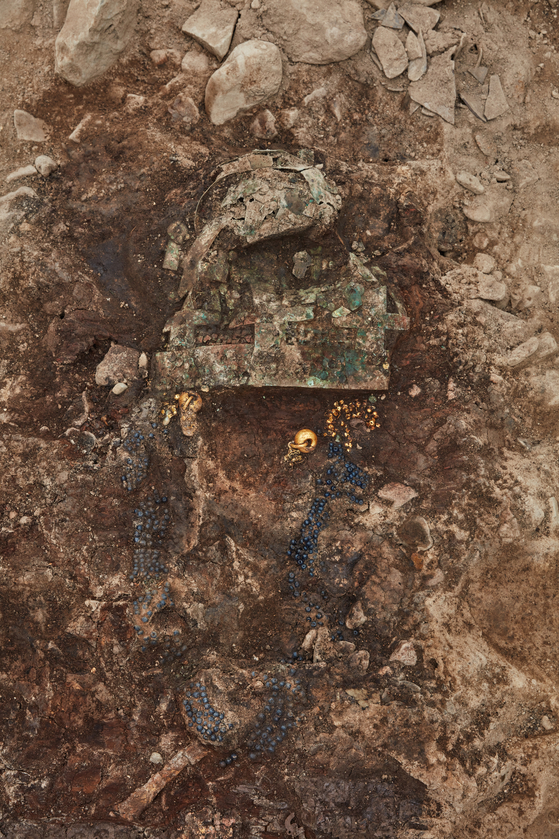 Findings from Hwawngnamdong Tumulus No. 120-2. [CULTURAL HERITAGE ADMINISTRATION OF KOREA]


It is the first time to find shoes that appear to have been on the body when it was buried. Until now, all the gilt-bronze shoes that were found in graves were placed next to the buried. The shoes have some decorative patterns punched on the front, while the backs are plain.

The Cultural Heritage Administration (CHA) said there was a similar shoe excavated from a grave in Uiseong in 1960. It added that such shoes weren’t something worn for daily use, but made for a ritual to send off the deceased.

The height of the deceased is thought to be about 170 centimeters (67 inches) given that the length between the middle of the coronet to the heel of the shoes is about 176 centimeters.

Researcher Lee Hyun-tae of a team that studies the recovery of artifacts and heritage from Silla under CHA also added his opinion that, from his archaeological background, the buried is a tall woman — although there is no absolute confirmation of the gender and height because no bones have been found.

He added that the average height of the people from Silla is still unknown, but it can be speculated that this person was exceptionally tall.

The study to investigate Hwangnamdong Tumulus No. 120 started in 2018. CHA joined hands with the regional government of North Gyeongsang as well as the city of Gyeongju to recover and clean up the major heritage of the Silla kingdom. They had confirmed the traces of grave 120-1, north of 120, and grave 120-2, south of 120.

“We will continue to do more scientific analysis to find traces of human bones, and to find out more about the social status and the gender of the buried,” said CHA.

The administration showed a variety of accessories it found online through its YouTube channel last week and answered questions.

In a way to share the newly found information and cultural heritage with the general public, the investigative team will continue using the online outlet to give real-time updates about the excavation site from now on.