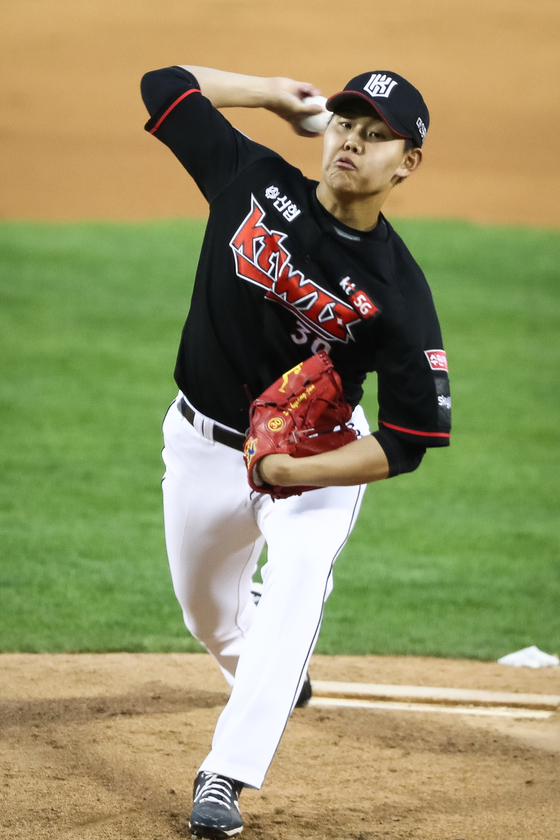 KT Wiz starter So Hyeong-jun throws a pitch during a game against the Doosan Bears at Jamsil Baseball Stadium in southern Seoul on May 8. [NEWS1]


Having overcome a freshman slump, KT Wiz pitcher So Hyeong-jun is getting right back into the KBO’s Rookie of the Year race.

As a high school rookie, So started off his KBO career with a 7.06 ERA for the month of May. His performance in August tells a very different story.

Throughout five starts in August, So picked up four wins and had a 1.57 ERA, good enough to be ranked first in the league’s monthly ranking. Of his four wins, he’s had quality starts in three games and a 0.198 batting average.

Having made his debut with the Wiz on May 8, during a game against the Doosan Bears at Jamsil Baseball Stadium in southern Seoul, So didn’t waste any time picking up a win. By doing so, he became only the eighth high school rookie to pick up a win in their first KBO start.

Following that first win, So continued his streak by picking up his second win in his next start, against the Samsung Lions at Suwon Baseball Stadium on May 15. Starting off the rookie season with two straight wins, So quickly arose as a strong candidate to win the Rookie of the Year award.

Despite that early success, So started to struggle. Throughout June, So managed just one win with four losses. Following his start against the Hanwha Eagles on June 26, So was given a two-week break.

He didn’t waste those two weeks. During that time, So learnt a new pitch — a cut fastball — from the Wiz’s two foreign pitchers and pitching coach Park Seung-min. So returned looking much stronger, and has now helped the Wiz into a potential postseason spot for the first time in the club's history.


As of Sunday, So has picked up nine wins and five looses throughout 17 starts, with a 4.42 ERA. He is only one win away from picking up his 10th win in his rookie season.

The Wiz are also looking stronger this season as they are tied for fourth, along with the Bears, with 55 wins, 43 losses and one draw.

Below are edited excerpts of an interview with So.

Q. You showed an amazing performance in August. What drove you to success last month?

A. I always get a lot of help from our coaches and veteran teammates. Trying to keep the mindset of focusing only on the things that I can do on the mound helps me to see good results.


Q. Were you struggling to focus on the mound?

At the beginning of the season, I would be shaken by the [umpire calling] walks or errors. I tried not to show it, but it always led to get bad results. But now, I’ve accepted that those are the areas that I can’t control. Honestly, in terms of fielder errors, I think it’s partly my fault for not being able to finish the inning early, which leads them to lose concentration. If there are variables, then I focus on trying to give up the least number of runs.


Q. You seemed to be stronger when you were pitching against teams with strong batting lineups like the Bears or NC Dinos. Do you do anything differently?

I’m sure the opposing batters analyze me, and I always prepare for each game. Our veteran catcher Jang Sung-woo’s lead has been a great help. I don’t really think about my performance against specific teams.


Q. Despite being a rookie, your poker face on the mound has left an impression. How do you do that?


Q. Before the start of the season, you also mentioned that Kang Baek-ho gave you advice too. What was it?

A. He told me not to get overawed by the name value and just throw my pitches. I didn’t get this when I was pitching well, but as I struggled in a number of games, I started to get scared [that I might give away a hit or a home run]. I realized that to see good results, I have to pitch with confidence.


Q. If you have to pick a batter that you feel is the most tricky to pitch against, who would that be?


Q. Then what was the most exciting matchup for you?

A. It was against the Samsung Lions’ Kim Ji-chan, who graduated in the same class as I did. We’ve known each other since elementary school. Back in middle school, I gave up a lot [of hits to him]. In the professional league, we faced each other four times, and I only gave up one hit. Whenever I see Ji-chan [at-bat] I smile. It’s fun to pitch against him.


Q. Your manager Lee Kang-chul said your outstanding performance was thanks to the addition of your cutter. What do you think?

A. Every time I throw it, it still feels different. It’s only been about a month since I started throwing that pitch. If I had the hang of it already I would be a genius. I'm still trying to get a feel for it. It’s not at a satisfactory level yet.


Q. Your ground ball per fly ball ration is at 1.83, good enough to be ranked first within the team. How do you feel?

A. Since high school, I wasn’t a power pitcher who strikes out a lot of batters. To get an out count with a strikeout, I need at least three pitches. There definitely are situations where I need the ability to strike out a batter. I think I need to learn that through experience. But I think it’s more important to throw a pitch that leads the batter to hit a grounder from my first pitch.


Q. For the first time since Ryu Hyun-jin back in 2006, you are en route to pick up 10 wins as a high school rookie. How do you feel about that?

A. Just my name being mentioned along with Ryu is an honor. I think it’s quite a record for a high school rookie to pick up 10 wins. But I’m trying not to think about it. I don’t have time to think about adding a win when I’m on the mound. As I focus on one batter at a time, I believe the meaningful numbers will follow.


Q. You’re also being mentioned as one of the most likely candidates for the KBO’s Rookie of the Year award this year. Are you thinking about that at all?

A. Our pitching coach Park Seung-min told me that when I try to grab it, it’ll get farther away. And that if I continue pitching well like now then the results will come along. I agree with him. Manager Lee Kang-chul gave me similar advice.


Q. The Wiz are competing for a postseason spot, raising the expectations for the rest of the season. How do you feel?

A. I’ve had big ups and downs with my pitching up until now. That is the part that I’m the most disappointed in. I’ll try to keep up my great pace for as long as possible. I’ll get through the season until the end, without getting injured.