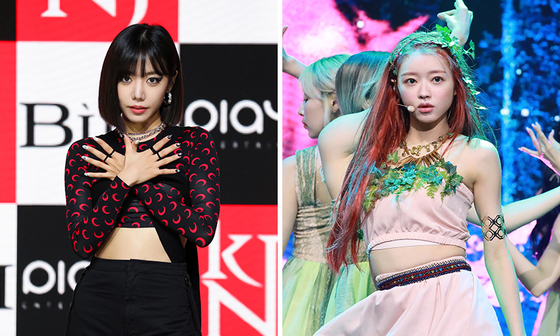 Kim Nam-joo of girl group Apink, left, and YooA of Oh My Girl [EACH AGENCY]


Girl power to start autumn — Kim Nam-joo and YooA from popular girl groups Apink and Oh My Girl made their solo debuts on Monday, each with a different theme to charm listeners.

Both singers held online showcases on Monday afternoon, Kim for her single "Bird" and YooA for her EP "Bon Voyage," and both took on the theme of setting out on a new journey as solo singers and showing new sides of themselves — but in two very different styles. 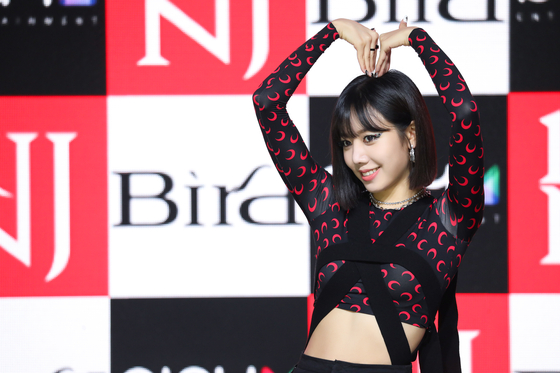 
For her solo debut, Kim went from pink to red.

Kim's "Bird" is based on a quote from the famed novel "Damien" (1919) by Herman Hesse, "The bird fights its way out of the egg," to illustrate her first flight as a solo singer.

"Members of Apink all have their own uniqueness and the team is complete when all those different colors come together," she said. "I have been loved so much as a member of Apink, but I think there are limits to showing who I am as Kim Nam-joo while I'm part of a team. So for this new step, I'm half nervous and half excited."

Composed by Soyeon, the talented leader of girl group (G)I-DLE, "Bird" is a powerful trap dance pop track that's very reminiscent of the dark-themed performances of (G)I-DLE, but interpreted in Kim's own style. It's far from the melodramatic romance theme that Kim has been donning as a member of Apink, but in no way does it mean that it doesn't suit her.

A lot of the focus went on the performance as well as the story line of the music video, during which she cuts her own hair to show her rebirth as a powerful female figure.

"I wanted to express myself as a powerful Amazon that breaks free from the egg," said Kim during the showcase. "I didn't include any other songs for this release, because I wanted to focus solely on this song and theme." 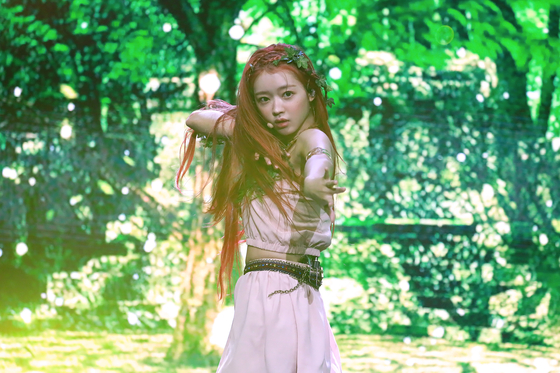 
Compared to Kim, YooA's title track "Bon Voyage" is softer and dreamier and sees YooA transform into a nymph in the forest.

The lead track is a "cinematic dance track" that conjures up the mystical green of nature, with pluck sounds that create a fantastical and dreamlike mood. YooA dances in her iconic feather-light style that makes her look like a fairy on stage. The transition in the mood of the song comes in the drop part where the song takes on an exotic and dynamic melody with a chorus that backs her voice up.


"There are seven members in Oh My Girl, and I've always thought that each of us are a color of the rainbow," said YooA. "I don't think I can define who is which, but for this album, I think my color is an emerald hue like the image of the forest."

As her title portrays, "Bon Voyage" is a song that celebrates her first journey as a solo artist. Just as Oh My Girl has been applauded by fans and critics for its step-by-step growth and maturity over the years, YooA also hopes to become an artist who develops step by step with each new move she makes.

"Just like Oh My Girl, I want to mature in steps — not all at once. I want people to look forward to the next move and the next," she said.

YooA also suggests that listeners take a chance to listen to "Far" and "Abracadabra."