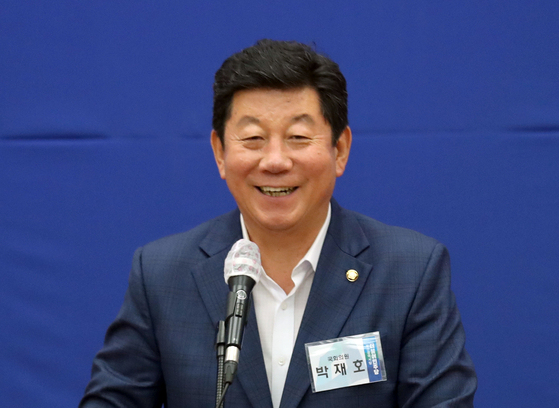 "I don't know if it was hacked or not, but we deleted it yesterday," Park told the JoongAng Ilbo. He added that unintentional posts on other politicians' Facebook pages also "happened before during the election campaign, so I told my aides to inform me if this happens frequently."

Park is a second-term lawmaker of the DP, and represents Nam B District of Busan Metropolitan City.

"I don't know if my aides made a mistake or pressed a wrong button. No one knows. I told them to wait and see. We are trying to find out what happened," he said.

On Sunday night, the video clip was shared on Park's Facebook account. It originated from a blog specializing in adult materials, and was deleted after about 10 minutes.

The video appeared to be pornographic material from a Southeast Asian country. It was posted with a Malaysian-language message, which roughly translated to, "A girl asked for help but no one heard her."

"His office said the Facebook account is managed by an aide, not the lawmaker himself," Hwang Gyu-hwan, deputy spokesman of the main opposition People Power Party (PPP), said Monday. "They are just trying to avoid responsibility [...] Their explanations are all inappropriate. No matter what had caused this, they must first apologize."

He added that the latest case should make the public wonder about the DP's commitment to eradicating the sex crimes committed by its politicians.

"Park represents a constituency in Busan, and the people of Busan have already been seriously hurt by former Mayor Oh Keo-don's sex crime," Hwang said. Oh resigned on April 23 after revealing that he sexually assaulted an aide during a recent meeting.