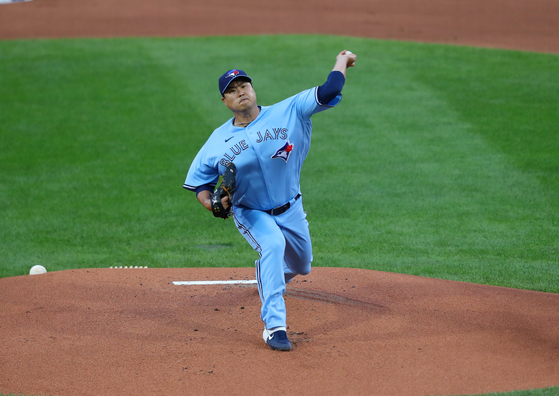 Ryu Hyun-jin of the Toronto Blue Jays throws a pitch during a game against the New York Yankees at Sahlen Field in Buffalo, New York on Monday. [REUTERS/YONHAP]


After a rocky first game, Ryu Hyun-jin of the Toronto Blue Jays was looking comfortable on the mound with his new Toronto team. Then he met the New York Yankees on Monday.

Starting against the Yankees at Sahlen Field in Buffalo, New York, Monday’s game didn’t work out in Ryu’s favor.

Things went wrong for Ryu at the top of the first inning. After easily recording the first out from DJ LeMahieu, Ryu immediately got into trouble by giving away back-to-back home runs to the Yankees’ first baseman Luke Voit and center fielder Aaron Hicks.

While the two teams were tied at 2-2, Ryu gave up another home run, this time to designated hitter Miguel Andujar. Ryu then gave up two more runs at the top of the fifth inning and was pulled out of the game.

“After allowing two home runs in the first inning [with my fastball], I had to change my approach,” Ryu was quoted as saying on Yonhap. “I didn’t plan on throwing so many changeups, but I had no choice but to stay on the outside corner because I gave up home runs on the inside pitches.”

Throughout the five innings, Ryu gave up five runs, six hits and two walks, while striking out five. Due to this, his ERA jumped up from 2.51 to 3.19.

Although Ryu looked likely to pick up his second loss of the season, the Blue Jays’ explosive batting lineup saved the day and Ryu walked away with another no decision. Ryu may not have been able to handle the Yankees, but the batting lineup certainly did.

While losing 6-2 at the top of the sixth inning, the Blue Jays made a huge comeback, scoring 10 runs at the bottom of the sixth including a grand slam from Danny Jansen.

“I gave up some early runs, and we had to play catch-up,” Ryu was quoted as saying. “Then, in the bottom of the sixth, our hitters really focused and did a tremendous job, in ways that I can’t even describe in words. I was happy to see Danny come up huge at the plate.”

“It’s really hard to put it into words,” Ryu was quoted as saying on MLB.com. “These guys did an amazing job with the little things all the way to the big things.”

With the 10 runs, the Blue Jays ended up with a big 12-7 victory over the Yankees. This also allowed the Blue Jays to extend their lead at second place in the American League (AL) East, two games ahead of the Yankees at 23 wins and 18 losses.

While the Blue Jays outperformed the Yankees, Ryu's performance was the latest episode in an old story — throughout his major league career, Ryu has started against the Yankees three times and has never performed well.

Ryu faced the Yankees for the first time back in June 2013, while playing for the Los Angeles Dodgers. During that game, Ryu picked up a loss by giving up three runs and five hits, which included a home run, throughout six innings.

Last season he faced the Yankees for a second time, once again picking up a loss and giving up seven runs and nine hits, which included three home runs, throughout four and one-third of an inning.

Although Ryu didn’t pick up a loss this time, as he once again gave up three home runs, he doesn’t seem to have figured out the Yankees yet. Regarding his poor performance against the Yankees, Ryu said that he’ll try to do better next time.

Monday’s game was the worst of the season for Ryu. The ace pitcher struggled at the beginning of the season, starting his first month with an 8.00 ERA, but quickly started to look comfortably on the mound in his latest outings. Ryu now has three wins and a loss over nine games with an ERA of 3.19.