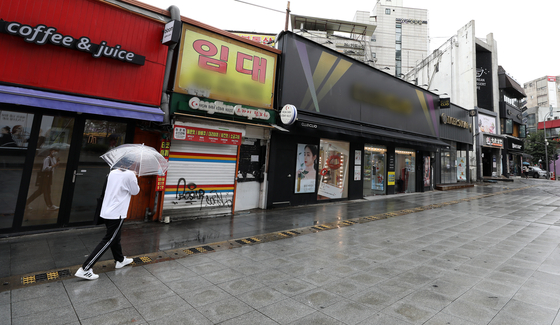 Sinchon in western Seoul, one of Seoul’s most vibrant university neighborhoods, is unusually empty and quiet on Sept. 7. [NEWS1]


It’s been about two weeks since the fall semester began, but university campuses are empty. While society concentrates on protecting students from contracting the coronavirus, there are victims who hesitate to draw attention to themselves: businesses in or near college campuses.

Mrs. Yoon, who owns a bar in front of Sungkyunkwan University, says she is worried about paying bills. Yoon’s bar barely has customers since the university canceled entrance ceremonies and put all lectures online.

“It’s no exaggeration to say that we saw a sales drop of nearly 100 percent,” Yoon said. “At the worst time, we didn't have a single customer for three days in a row. This is actually a way more serious problem than most people think.”

Yoon added, “I have to pay 10 million won ($8,400) every month in rent. I don't know how I'll pay the money. The building owner never wants to understand my situation.”

According to Yoon, many business owners near Sungkyunkwan University in Jongno District, central Seoul, are closing their stores as they can’t afford to keep going.

For businesses in or near Seoul's many university campuses, Covid-19 is a pandemic and an economic catastrophe. As the coronavirus started spreading in Korea in February, the government urged schools not to hold face-to-face classes. Korea's university students nationwide had to take online classes for the entire spring semester earlier this year.

“For us, the beginning and end of a semester are the time when sales reach their peak. Each department of the university holds large greeting and ending ceremonies every semester, as well as parties celebrating the end of final exams,” Yoon added. “Losing them is equal to losing all of our customers. I was forced to fire all my part-time workers as well.”

The depression is most evident in Sinchon, western Seoul, one of Seoul’s most vibrant university neighborhoods. It is the hub of three major universities — Yonsei University, Ewha Womans University and Sogang University — all in a 20-minute walk of each other.

“The number of students on campus constantly decreased since the outbreak of the coronavirus earlier in the year, and now, I barely see them,” said Mr. Park, who runs a cafe on the Ewha Womans University campus.

Park said his sales saw an 80 percent drop last month compared to the same period before the coronavirus paralyzed campuses.

“As a person who owns a cafe on campus, I have no other customers except for Ewha Womans University students,” he continued. “Business owners on campus of cafes and restaurants are all suffering a lot these days, and some have already left.”

Restaurants and cafes are not the only victims.

Mrs. Oh, who has been running a flower shop in front of Yonsei University for over 30 years, said she almost collapsed when she heard about the cancellation of the school’s graduation ceremony, which was supposed to be held in mid-August. 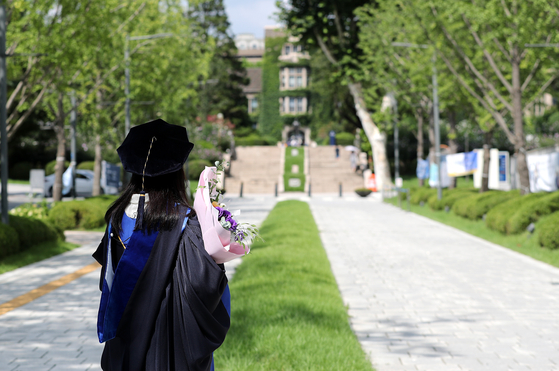 A Yonsei University student dressed in gown and graduation cap stands on the campus in Seodaemun District, western Seoul, on Aug. 23. Amid concerns over the spread of the coronavirus, the school canceled its graduation ceremony and only allowed students to take pictures individually with their families. [NEWS1]

According to Oh, times have never been this dire.

“The entrance and graduation seasons of nearby universities, especially Yonsei University, are the major time when flowers are sold,” Oh said. “As there are no students and no events at all [due to the Covid-19], I can’t even pay the bills now.”

Oh added, “I sold a bunch of house plants for 3,000 won yesterday. Today, I didn't have a single customer the whole day. I’ve been owning this flower shop for over 30 years. What should I do? Should I close the shop like other stores in Sinchon?”

A lot of restaurants, bars and cafes are empty in Sinchon.

According to the Korea Appraisal Board, the average vacancy rate for commercial buildings in Sinchon in the second quarter of the year hit 10.5 percent, more than the average for Seoul, which was 7.9 percent.

The vacancies are led by a “rising number of people who went out of business due to weak consumer sentiment and a sharp decline in sales caused by the Covid-19 outbreak,” according to a spokesperson for the Korea Appraisal Board.

“More and more people are trying to close their businesses at this time,” a real estate agent in front of Yonsei University said. “To be honest, more than 80 percent of all remaining businesses are currently up for sale. But, you know, who would want to buy one now?”

“My only prayer for the past few months was an end to the coronavirus and a return of students,” Oh added. “However, while the second wave of the virus attack escalates, universities are likely to put all lectures online again.”

Just five weeks ago, Korean universities were planned to hold small-sized lectures and face-to-face classes as daily Covid-19 infections had remained low. However, a second wave of the virus is forcing them to send students back home again.

Yonsei University recently said it will shift all lectures, as well as midterms, online until the end of October. Others such as Seoul National University and Sogang University will hold courses online for the first four weeks of the semester.

Hanyang University, Hankuk University of Foreign Studies and Konkuk University are also planning to hold all lectures online for the first two weeks of the semester, and they say the period can be extended if the virus keeps spreading.

University students who live in tiny one-room accommodations, or officetels, near their schools are in a panic as they have to pay monthly rent although they do not go to school at all.


“I feel like the situation is repeating again,” a 25-year-old Ewha Womans University student Yoo, who lives in an officetel near her school, said.

According to Yoo, all of her courses in the spring semester were held online. She had to pay monthly rent and additional bills without going to school a single time. Yoo recently signed another rental contract ahead of the fall semester.

“I would have just gone home to Gwangju [where my family lives] if I knew the courses would be held online. The fall semester just started, and I feel like it will be just like last semester. Do I have to waste all my money again?”

Park Beom-jin, a 23-year-old Hanyang University student, currently lives in a gosiwon — very small rooms rented out cheaply to students preparing for exams — near his school. According to him, as all courses of the last semester were entirely held via online, there was no point for him to stay at his gosiwon.

“I paid monthly rent, electricity and gas bills even though I didn't go to school a single time,” Park said. “Eating also cost me. It is such a waste of money.”

A shortage of job opportunities is another unexpected problem. College students who need part-time jobs can’t find any.

“When I had a job interview with a cafe owner, he said he was looking for an experienced worker,” Lee said. “According to him, he used to have two part-time workers but had to cut one as he can’t afford paying them amid the Covid-19 pandemic.”

Mr. Lee, a 28-year-old studying for the civil service exam, said he was recently laid off from his part-time job.

“While studying for the exam, I used to work at a pub in front of Hanyang University at night to earn money for monthly living expenses,” Lee said. “After I lost the job, it’s been really tough for me to get another opportunity.”

According to a survey of 749 university students conducted between June 16 to 23 by job search app Albacall, which is operated by Incruit, 90.5 percent said they find it extremely difficult finding part-time jobs. In this group, 55 percent singled out “a shortage of job opportunities after the Covid-19 outbreak” as the reason.

Some 183,000 part-time workers were laid off in May alone, according to data by Statistics Korea. The economically inactive population reached 16.54 million as of May, rising by 555,000 compared to the same month a year earlier.