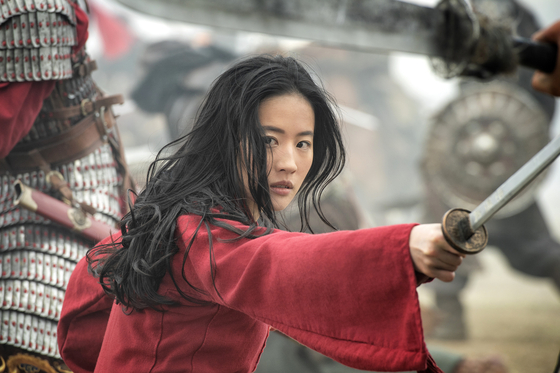 This image released by Disney shows Yifei Liu in the title role of "Mulan." [AP/YONHAP]

Due to the coronavirus pandemic, "Mulan" was made available for purchase in the United States on the Disney+ streaming platform over the Labor Day weekend, and in movie theaters in a handful of other countries.

The film will debut in cinemas in China, the world's second largest movie market, on Friday.

"We are very pleased with what we saw" over the Labor Day weekend, said McCarthy, who spoke via online video to the Citi 2020 Global Technology Conference.

"Mulan," a $200 million remake of an animated Disney classic about a female warrior in China, was designed to appeal to audiences in the country.

But the movie has run into controversy over its star's support of Hong Kong police and for being partly filmed in the Xinjiang region, where China’s clampdown on ethnic Uighurs and other Muslims has been criticized by some governments, including the United States, and human rights groups.

Disney had originally planned to release the film in theaters around the world in March but scrapped that plan when the novel coronavirus spread.

McCarthy said Disney ultimately decided to launch "Mulan" online in markets where Disney+ is available because many theaters remained closed and surveys showed most people were not ready to return to theaters during the pandemic.

"It was not an easy decision to make because there were so many factors at play here," she said.

Samba TV, which tracks viewership on smart TVs, estimated that more than 1.1 million U.S. households paid $30 each to watch "Mulan" on Disney+ between Friday and Monday.

That would translate to $33.5 million in revenue from the film, plus additional earnings from anyone who became a new Disney+ monthly subscriber.

Samba TV said its estimates were calculated using data from smart TV owners who opted in to the Samba TV app and agreed to provide viewing information. Disney had no comment on the Samba TV figures.