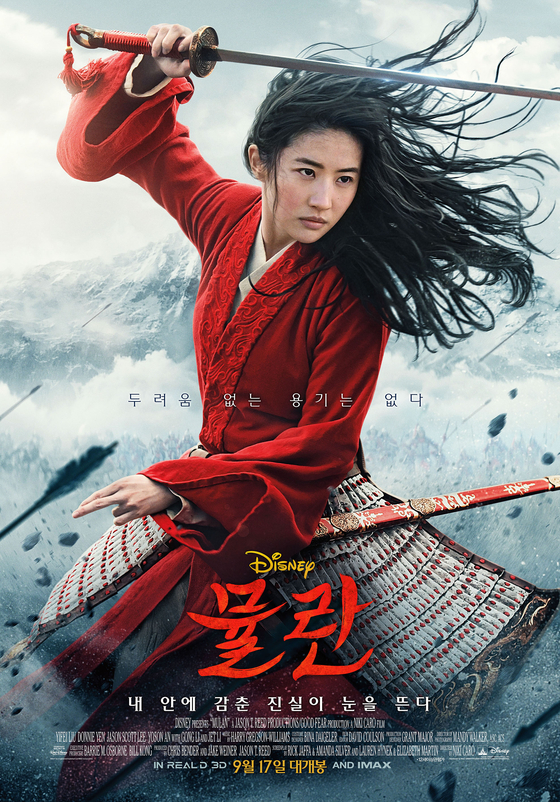 
“I do not wish to see a film where a lead actor supports the brutality of the Hong Kong police force.”

“We need to boycott ‘Mulan’ and show Disney an audience that puts forward basic human rights and to not be an accomplice to autocracy.”

“I really wanted to see Mulan... But after seeing [the news] that the credits thank the CPC Xinjiang Uyghur Autonomous Region Committee, I changed my mind: I’m never going to see the film.”

These are just some of the comments written in Korean that can be found on social media when searching the hashtag “boycott Mulan.” 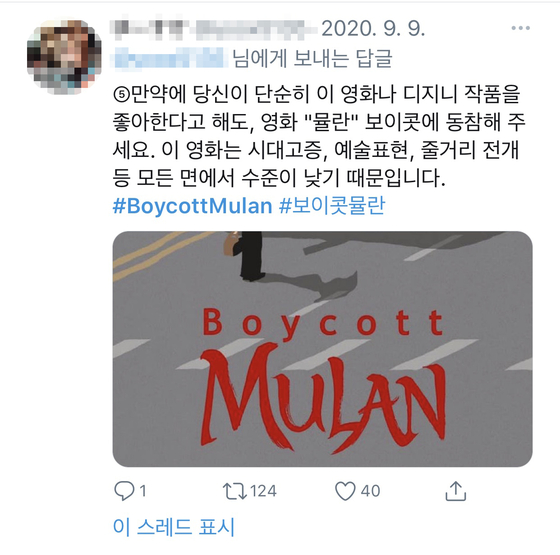 
Controversy surrounding Disney’s live-action film “Mulan” is snowballing to the point of a global boycott against the film despite it being one of the most highly anticipated films of the year. A remake of the 1998 animated film with the same title, it is one of the company’s all-time favorites as it centers around the transformation of a young girl in ancient China who becomes a warrior to protect her family.

After facing multiple delays due to the Covid-19 pandemic, the film was finally released on Disney+ in the United States on Sept. 4 and is hitting global theaters which do not have access to the streaming platform.

The boycott movement was ignited when the lead actor Liu Yifei, a naturalized U.S. citizen, shared a Weibo post last year from the Beijing newspaper People’s Daily, supporting Hong Kong’s police force against protesters fighting for democracy after Hong Kong’s extradition law was put forward. In the post, the actor wrote in Chinese, “I also support Hong Kong Police. You can beat me up now,” and also added in English, “What a shame for Hong Kong.” 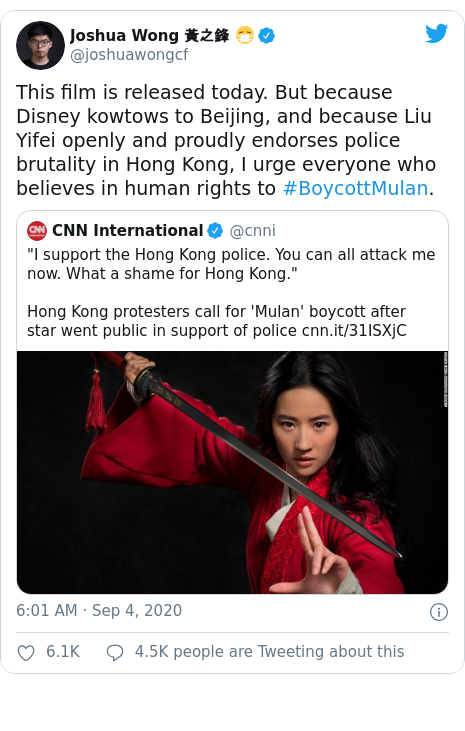 
Pro-democracy activists, such as Joshua Wong who rose to prominence for his role in Hong Kong's so-called Umbrella Movement in 2014, have urged global audiences who “believe in human rights” to boycott the film. The movement is spreading quickly via social media, with activists in Thailand and Taiwan coming up with their own hashtag #MilkTeaAlliance, to show their support for pro-democracy protesters in Hong Kong.

Another, bigger backlash hit the film when credits gave special thanks to several government entities in Xinjiang, including the “Publicity Department of CPC Xinjiang Uyghur Autonomous Region Committee” for allowing parts of the film to be shot in the region.

According to CNN reports, approximately 2 million Uyghur people are said to be detained in prison camps in Xinjiang where they are “subjected to torture, cruel and inhumane treatment such as physical, and sexual abuse, forced labor and death.”

As well as outrage online, a group of Republican senators made an official inquiry addressed to Disney CEO Bob Chapek last week concerning “security and propaganda” related to the authorities in Xinjiang with the production of Mulan.

In the letter, the lawmakers ask the company to specifically address the requests and demands made by the Xinjiang government entities listed in the credits, and question how aware the company was of the cultural genocide happening within the region, as well as whether or not there was any usage of forced labor regarding the film production.

In addition, reviews criticize that the film lacks an overall understanding of Chinese culture and also points out the lack of Asian talent behind the cameras despite the all-Asian cast. Neither the director, screenwriters or any of the costume designers are of Chinese descent.


Proven by the numbers?

Disney’s prior live-action films, for the most part, have been received positively in Korea. In fact, it’s no secret that local audiences are extremely lenient when it comes to such films, eager to see their favorite childhood animations played out by real characters. The best example being “Aladdin” (2019) which topped the weekend box office for weeks on end and reaped more than 12 million ticket sales. The film currently sits at No. 11 on the list of most-watched films, according to Korean Film Council data.

But just as the company targets adults in their 20s and 30s who grew up watching animated films, the impact of the boycott may be felt the most in these age groups who are most media sensitive.

“The mainstream audience who visit the cinemas are those in their 20s and 30s,” said Lee Taek-gwang, a professor of the School of Global Communication at Kyung Hee University. “And especially the latter now come hand-in-hand with their children to see these films. Our generation has pride in the fact that the country succeeded in democratization, so it’s highly likely that the people will participate in the boycott movement.

“Young children may see the film via streaming services, but in box office sales, the result may not be as high as [Disney] expected,” Lee added.


Some have taken action offline. The Declaration of Global Citizen, a civil rights organization, staged an official protest in front of the Walt Disney Company Korea building in Gangnam District, southern Seoul, in July to support the global boycott movement.

“Whether it’s about Hong Kong democratization or boycotting Mulan, they’re all of universal matter,” Park Do-hyung, co-representative of The Declaration of Global Citizen told the Korea JoongAng Daily when asked why Korea should participate in boycotting the film. “Hong Kong’s democratic movements are not irrelevant to our country. We should stand together to show our solidarity as we are all universally connected [in our beliefs].”

Park said that their requests sent to three major multiplex chains— CGV, Lotte Cinema and Megabox— to prohibit the screening of films have gone unanswered.

“But we are still planning to install props and host one-person demonstrations to show that [our stance stands firm],” Park said.

Culture critic Ha Jae-geun, on the other hand, forecasts that the boycott movement alone won’t determine whether or not the film will be a success or a flop.

“Of course, due to the global movement, its effect will trickle over to local box office sales,” Ha analyzed. “But if the film is worthy of becoming a hit, it may not be a determining factor. However, as people continue to access news of Hong Kong, democratization, human rights, I believe there will be more people who wouldn’t want to see the film [anymore] than vice versa.”

The film premieres in local theaters on Thursday.