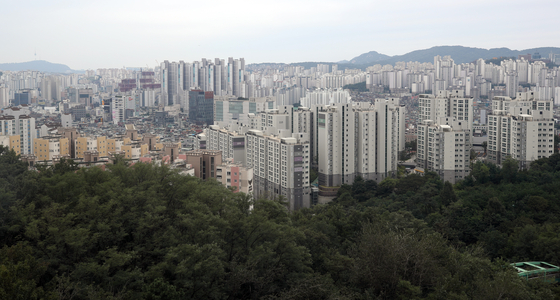 
It’s been over a month since the government’s tenant protection laws went into effect, but jeonse prices in Seoul have continued to go through the roof.

According to the Korea Appraisal Board, Seoul jeonse prices continued an upward trend for 63 consecutive weeks. They rose by an average 0.09 percent from Sept. 1 to 7 compared to the previous week.

During the same period, jeonse prices in the greater Seoul area — Seoul, Gyeonggi, and Incheon — rose by 0.16 percent, continuing a streak of 57 consecutive weeks of increases.

Under Korea’s unique jeonse system, a person puts down a large lump-sum deposit in order to live in a property for a number of years. The deposit is refunded without interest at the end of the contract.

In Mapo District, western Seoul, they rose by 0.15 percent. Jeonse prices of popular apartments in Ahyeon-dong, Gongdeok-dong and Dohwa-dong, and jeonse prices for flats smaller than 60 square meters (650 square feet) throughout the district increased.

In Seongbuk District, central Seoul, they jumped by 0.12 percent. The increase was largely due to soaring jeonse prices in new apartments in Gireum-dong and Jongam-dong.

In the Gangnam region, which refers to three districts south of the Han River — Gangnam, Seocho and Songpa — middle-sized apartments were the biggest factor fueling the increase in jeonse prices.

Gyeonggi was not an exception.

Jeonse prices in Gyeonggi rose by 0.21 percent. In the Giheung District of Yongin, they jumped by 0.45 percent, especially in Dongbaek-dong and Gugal-dong in which have better transportation options.

In Gwonseon District, Suwon, jeonse apartment prices jumped by 0.45 percent while those in the city of Gwangmyeong rose by 0.43 percent.

During the same period, jeonse prices in Sejong city also rose by 0.87 percent compared to the previous week.

“Apartment transactions have been decreasing due to the tenant protection laws passed by the government in July, as well as the impact of a prolonged Covid-19 pandemic,” the Korea Appraisal Board wrote.