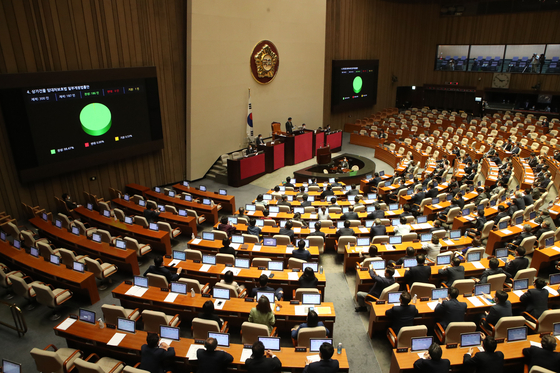 The United Future Party’s seats are empty after the main opposition party walked out in protest of the jeonse reform legislation at the National Assembly in Seoul on Thursday. [YONHAP]


The ruling party rammed through two of three bills designed to protect tenants Thursday, including limits on hikes of jeonse, or long-term rent deposits.

But landlords were ahead of them, demanding more jeonse from existing tenants before the laws go into effect as early as mid-August.

The bills were passed easily: among the 187 lawmakers that attended the session, 186 voted in favor while one abstained. The main opposition United Future Party boycotted the vote.

One bill places a cap of 5 percent on increases in jeonse when leases are renewed.

The legislation automatically extends two-year jeonse contracts for another two years. Landlords will only be able to refuse extensions if they are moving into the units themselves.

If they break the new law and sign contracts with new tenants, old tenants have a right to claim damages from landlords.

A third bill requiring landlords to report to the government actual rent prices was not passed Thursday and may be voted on next month.

The government’s passage of the two bills was swift — but not as swift as landlords' demands for more money.

Ms. Yim, who lives on a jeonse contract in an apartment in Seongsu-dong, western Seoul, said her landlord recently demanded an additional 120 million won ($100,000) in jeonse.

The current jeonse is 640 million won and her contract expires in Oct. 1.

According to the Korea Appraisal Board, the price of jeonse in Seoul rose 0.14 percent between July 20 to 27 compared to the previous week — the largest increase in seven months.

The increase was largely led by the greater Gangnam area in southern Seoul: jeonse prices in Gangnam District rose by 0,24 percent, in Seocho District by 0.18 percent and in Songpa District by 0.22 percent.

The jeonse price for an 85-square-meter (915-square-foot) space in the Jamsil LLLs complex in Songpa District, southern Seoul, which was 900 million won last month, is now around 1.1 billion won, a 22 percent hike.

An 84-square-meter flat in the Raemian complex in Mapo District, western Seoul, increased by 90 million won, or 11 percent, to 890 million won compared to two weeks earlier.

“Who does the revised law work for?“ asked a 40-year-old jeonse tenant in Nowon District, northern Seoul, who only wished to be identified as Seong.

The 40-year-old said his landlord asked him to pay an additional 80 million won to renew their jeonse contract, which came as a big surprise: The same landlord has not raised the jeonse price for the past eight years.

“Landlords are raising their jeonse prices by more than 50 million won saying that they can’t increase it any more after the tenant protection law is passed,” a real estate agent in Mapo District said.

The shortage of apartments available on jeonse contract could make matters worse, especially as many landlords are now opting to charge monthly rent rather than jeonse.

Some say that the unique rental system of jeonse in Korea may be coming to an end.

According to the Korea Housing-Finance Corporation, 62 percent of residential rental contracts are on the jeonse system as of now.

“For tenants, the jeonse system is a better option than monthly rent as they can receive their deposits back as soon as they move out,” said Lim Chae-woo, chief real estate researcher at KB Kookmin Bank.

Signs are already showing in some areas of Seoul including Gangnam.
Recently there were no jeonse offers at a popular apartment complex in Gangnam, Eunma.

He bought it for 1.5 billion won and has been renting it out on a 50-million-won jeonse contract.

Park said he recently asked his tenants to move out so that he could sell.

“There’s no point of holding onto a 50-million-won deposit in a time of low interest rates,” Park said.

“Jeonse apartments played a critical role for lower-income households who couldn't afford to buy property,” said Shim Gyo-eon, a real estate professor at Konkuk University. “If they are [forced] to move outside of Seoul, jeonse prices in those areas will spike as well, leading to a vicious cycle.”

Lee Chang-moo, a professor of urban planning and engineering at Hanyang University, said Korea is the only country that regulates its residential leasing market intensively.

“There will be some unexpected problems amid the high volatility of domestic housing lease market,” said Lee.

Yun Ho-jung, a Democratic Party lawmaker who chairs the National Assembly’s Legislation and Judiciary Committee, said the swift passing of the bills was necessary to protect tenants against soaring rents.

The Legislation and Judiciary Committee was the last gateway before the bills were put to votes in the National Assembly.