Even if you manage to get your hands on 400 million won ($338,000), you'll still have trouble securing an apartment using a jeonse long-term lease.

According to data from a real estate app Zigbang on Monday, of all jeonse contracts made in the first half in Seoul, only 52.7 percent were priced below 400 million won.

Under Korea’s unique jeonse system, a person can make one lump-sum payment in order to live in a property for a number of years. They receive the entire amount back, without interest, at the end of the contract.

The median sale price of an apartment flat in Seoul is around 900 million won.

In 2011, jeonse apartment units priced 400 million won were 89.7 percent of all jeonse transactions. That declined to 64.1 percent in 2016 and eventually reached 52.7 percent this year.

Jeonse leases costing 200 million won or under were 43.3 percent of the total in 2011. That fell to 13 percent in the first half of this year.

The situation is most evident in affluent southern Seoul.

In the three greater Gangnam districts — Gangnam District, Seocho District and Songpa District — only one out of 10 jeonse apartments were priced lower than 400 million.

Low-priced jeonse transactions were mainly concentrated in Nowon District, Dobong District and Gangbuk District, all in northern Seoul, in which 88 percent of all contracts were priced 400 million won or under.

In Seoul’s southwestern areas — Gwanak District, Geumcheon District and Guro District — some 76 percent of all jeonse transactions were priced at 400 million won or under. 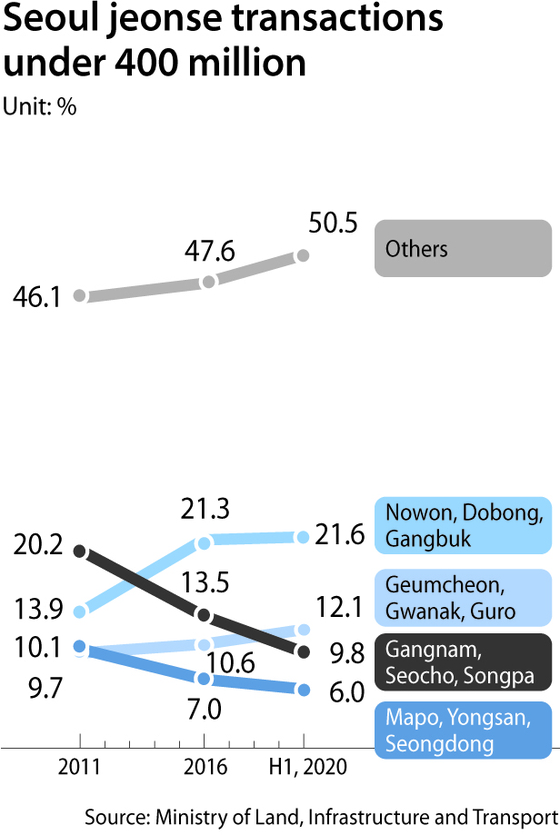 People with little money have no choice but to settle for old and outdated houses.

A person seeking an 85-square-meter apartment unit will have to pay a jeonse of 600 million won.

The jeonse flats priced higher than 900 million won are on average 15.1 years old.

“It is time to come up with various measures to improve the quality of residences according to the demands from jeonse tenants,” said Ham Young-jin, head of the big data lab of Zigbang.

The situation is likely to be tougher in the second half of the year.