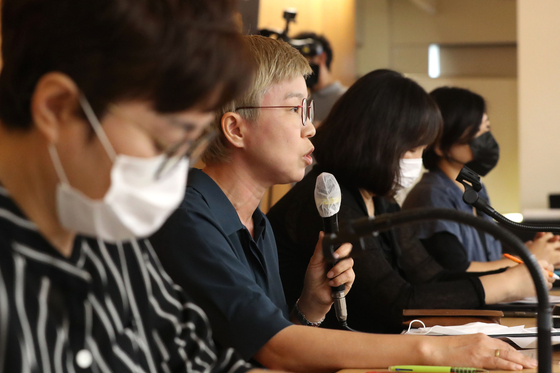 Kim Jae-ryon, second from left, a lawyer representing a former secretary of the late Seoul Mayor Park Won-soon, speaks about the secretary’s ordeal during a press conference in Seoul last July. [YONHAP]

A former secretary of the late Seoul Mayor Park Won-soon, whom in July rocked the nation with claims she was sexually harassed by Park for years, has come forward with a new allegation that she was raped by another city employee in April.

In an interview with the JoongAng Ilbo last Friday, the secretary’s lawyer, Kim Jae-ryon, said the Seoul Metropolitan Government ignored the victim’s call for punishment of the alleged rapist, adding it was only after the victim leaked the case to a local news outlet that the suspect was suspended from his post — which means he remains a city government official.

Kim said she and the secretary have decided to publicly speak out about the rape allegation in order to point out the city government’s “structural problem” in dealing with sexual abuse cases.

The secretary’s fresh accusation came as a double whammy for the Seoul government, who lost its longest-serving mayor just two months ago. Park, who served as the Korean capital’s top official since 2011, took his own life on July 9, a day after the secretary filed a sexual harassment complaint against him with the Seoul police.

Park left a suicide note at his home apologizing to the public, but it made no mention of what he was sorry for.

In a series of press conferences and statements through Kim, the alleged victim claimed the Seoul Metropolitan Government ignored her numerous calls for help when she told colleagues about Park’s unsolicited sexual advances, such as sending her late-night selfies and lewd text messages.

Seoul officials denied knowing anything about the case. Police launched several investigations, but no critical breakthroughs have yet been made. Upon the victim’s request, the National Human Rights Commission of Korea launched its own probe in late July and is still investigating.

The alleged rape goes back to April 14, a day before the general elections.

According to Kim, the victim, who by that time wasn’t working in Park’s secretariat office, was invited to have dinner with her old colleagues. The victim got inebriated, and the suspect took her to a motel, where he allegedly raped her. The victim called the police after she went home.

Kim said the Seoul Metropolitan Government transferred the suspect to a different team soon after the incident. Government officials are normally suspended from their posts after rape accusations are made against them, said Kim.

On April 22, the victim sent a text message to Seoul’s personnel officer, who was in charge of the city's human resources, asking for harsher internal punishment against the suspect, but the Seoul Metropolitan Government didn't do anything, Kim said. The victim then leaked her allegation to a local media outlet, which published a story on April 23.

A day later, the Seoul Metropolitan Government announced in a statement that an alleged rape occurred and that it suspended the alleged perpetrator upon hearing from police that an investigation had officially been launched that day. The city government also apologized to the victim for not acting quicker.

To this day, the suspect remains a city government official.

Police referred the case to prosecutors in early June with a recommendation to indict the suspect, and a probe has been ongoing ever since.

seoul seoul mayor suicide me too