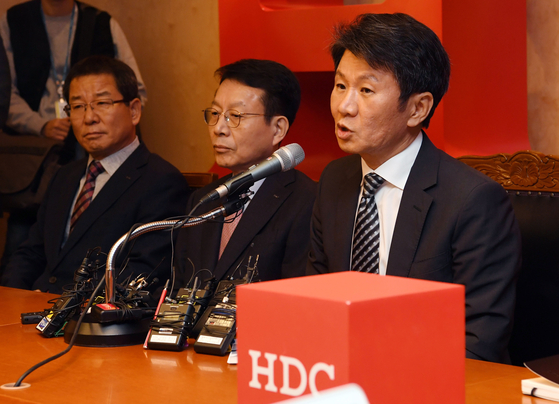 HDC Holdings Chairman Chung Mong-gyu during a press event held in central Seoul in November after the company was selected as a preferred bidder to acquire Asiana Airlines in a consortium with Mirae Asset Daewoo. [YONHAP]


Hyundai Development Company (HDC) may take legal action in its failed acquisition of Asiana Airlines, according to a statement it released Tuesday.


The company agreed last December to buy the 30.77 percent of the carrier from Kumho Industrial as well as newly issued shares, but the transaction fell apart after HDC said it could not complete to takeover until it had conducted additional due diligence on the troubled airline.

In the statement, HDC blamed Kumho Industrial and Asiana for the collapse of the deal, noting their "unilateral termination of the acquisition on Sept. 11." It added that it may take action against the two companies after reviewing the relevant law.

HDC made specific mention in the statement of the 250 billion won ($212 million) down payment it made for the transaction, in which it would have acquired control of Asiana Airlines and six subsidiaries, including budget carriers Air Busan and Air Seoul, for 2.5 trillion won.

They company blamed Korea Development Bank (KDB), an Asiana Airlines creditor, for not working with it in good faith, saying that it met with the bank's chairman Aug. 26, but that nothing meaningful was discussed.

HDC said its repeated request for additional due diligence “wasn’t an excessive request at all” since HDC Group’s survival could have been threatened by numerous risks involving the airline. The company noted a Fair Trade Commission decision last month to fine Asiana Airlines and related companies a total of 32 billion won for wrongdoings related to the airline's catering contract.

It also took issues with the ballooning debt of the airline, specifically the issuing of the convertible debt without the consent of the acquirer.

Kumho Industrial said it handed over materials requested by HDC during the acquisition process, while the KDB chairman blamed HDC last month for the failure of the deal and said that accusations leveled by the buyer are groundless and malicious.

HDC said it planned to develop a diversified transportation company with the purchase of Asiana and that it finds the termination of the deal confusing.