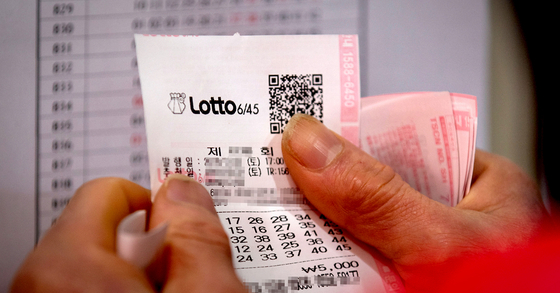 A person is checking their Lotto lottery ticket with the winning numbers. [YONHAP]


Lottery sales hit an all-time high in the first half possibly due to the economic impact of the pandemic.

The sale of lottery products increased on year by 11.1 percent to reach 2.6 trillion won ($2.2 billion) through the end of June, according to data released Wednesday by the Lottery Commission, which is under the Ministry of Economy and Finance. This is the largest won amount sold since the commission started compiling related data in 2005.

It is the steepest first-half increase since 2017, when sales rose by 17.7 percent on year.

The lottery was introduced in Korea in 2004.

Lottery products normally sell well during times of economic weakness. The sales results could mean that more people were betting on the chance to hit the jackpot to help them through the pandemic recession.

Sales of pension-type lottery tickets rose 68.2 percent, with 85.5-billion-won worth sold in the first half. That is the most since records were first compiled in 2012.

Introduced in 2011, the pension-type lottery gives the winner a fixed amount of money over a 10 to 20-year period. The monthly prize for winners was increased in April from 5 million won to 7 million won.

The game was immensely popular in 2012 when it first came out, with sales reaching 100 billion won, but it steadily declined as gamblers seem to prefer the chance for a big prize.

The Lottery Commission believes that the increase of the payout for the pension-type lottery could be helping sales.

Profits from the sale of tickets hit 1.72 trillion won, up 9.6 percent from the same period a year earlier. It is the first time Lottery Commission profits broke 1 trillion won in the first half. Money raised goes to the Lottery Fund, which supports low-income families, independence fighters and welfare programs.