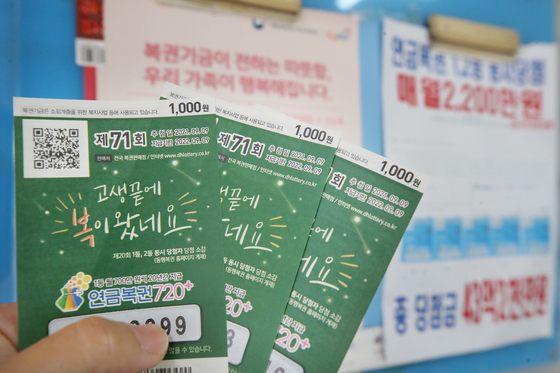 Lottery ticket sales hit a record high as people count on luck to help them through the global pandemic.

According to the Korea Lottery Commission on Monday, 2.9 trillion won ($2.5 billion) worth of lottery tickets were sold in the first half of the year, a new record and 12.6 percent higher than a year earlier.

Among lottery tickets, Lotto, the lump-sum payout, sold 2.5 trillion won, a 10.3 percent increase and the highest since it was first introduced in 2005.

Lotto tickets accounted for 86.5 percent of all lottery tickets.

However, pension-type lottery tickets, with pay its winners in annuities, saw a surge.

This was the biggest year-on-year jump in the January to June period since those kind of lottery tickets started selling in 2012.

This was largely because the payout was significantly raised since April 2020.

Before changes in 2019, two winners received monthly pre-taxed payments of 5 million won for 20 years. That figure was raised to 7 million won in April 2020.

Previously, four runner ups won single payments of 100 million won. That has been changed to eight runner ups who win 1 million won a month for 10 years.