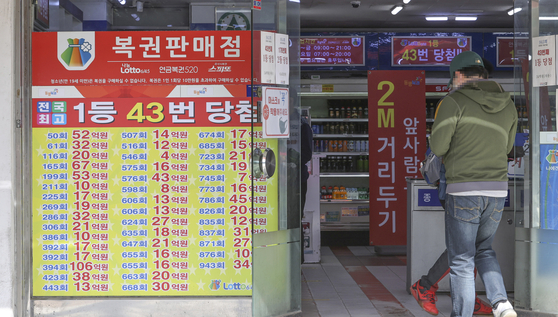 A lottery store in Nowon District, Seoul, on April 13. YONHAP]

The Covid-19 pandemic made some people tighten their purse strings, while others decided to try out their luck.

According to a study by Statistics Korea, households spent an average of 590 won a month buying lottery tickets in 2020 -- a 7.2 percent increase from 2019.

That monthly investment in the "You never know" mentality is a record high since data has been compiled in its current form, starting in 2006. Data from between 2016 and 2017 is excluded because the survey method was different.

“While the monthly average is only 590 won, because the average includes households that don’t buy any tickets, one can’t say it's a small amount,” said Jung Goo-hyun, head of the statistics agency’s short-term household income and expenditure statistics division.

Households with incomes in the bottom 20 percent spent an average 352 won per month on lottery tickets. The amount is the smallest among income groups, but its on-year growth rate of 45.3 percent was the highest.

Households with incomes in the top 20 percent spent an average 632 won a month, which was up 44.8 percent.

Households with incomes in the second richest tier spent an average 723 won a month, up 33.1 percent.

According to the Finance Ministry’s Lottery Commission, nearly 4.71 trillion won worth of lottery tickets were sold last year, a 9.3 percent year-on-year increase.