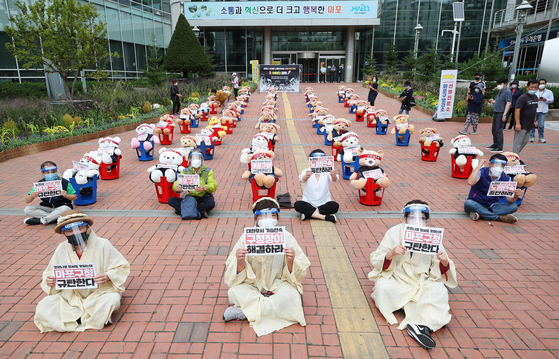 In compliance with social distancing measures banning demonstrations involving 10 people or more in the capital, members of a union representing street vendors in western Seoul protest outside the Mapo District Office on Thursday with dolls. [YONHAP]

Health authorities Thursday said more than a quarter of those diagnosed with the coronavirus in Korea over the past two weeks were traceless, the highest proportion since officials began to compile the data in April.

The Central Disease Control Headquarters said in a statement that among 2,013 people who tested positive for the virus from Sept. 4 to Thursday, 532 people, or 26.4 percent, represented traceless cases, which means epidemiologists could not determine where or how they got infected, raising concerns of inadvertent transmission.

With the Chuseok holidays coming up, this trend could lead to a serious outbreak, officials warned.

The Chuseok holidays, also known as the Korean harvest festival, is one of the country’s two largest holidays when families gather to eat and pay respect to their ancestors. This year’s holidays last three days from Sept. 30 to Oct. 2, but Oct. 3 and 4 are a weekend, which means many people will have five days off. The other big holiday is Seollal, or Lunar New Year’s Day, slated for mid-February 2021.

“For the upcoming holidays, please refrain from visiting your families and traveling, and think of the period as a time to prevent the spread of the virus,” said Jeong. Health “authorities, too, will do our best to contain a possible outbreak with heavy responsibility.”

Jeong noted she was worried about the holidays not only because of traceless infections but also due to the fact that daily cases haven’t dropped steeply enough.

Over the past 15 days, Korea’s daily virus count has hovered between 100 and 200, lower than the 300 to 400 cases that were being recorded in late August, but still not hitting the government’s goal of fewer than 100.

Jeong stressed the need to wear face masks at all times, calling it a “self-vaccine” and “safety belt,” especially when the world doesn’t have a vaccine yet. In the winter, personal protection will particularly be important given the fact that the virus is expected to more easily spread than in the warmer months, she stressed.

Over the weekend, health authorities said they would announce whether Level 2 social distancing measures currently imposed on the entire nation will be lifted for regions outside the Seoul metropolitan area on Sunday midnight as planned.

Authorities stressed that even if the central government does decide to lift the Level 2 measures for areas outside Seoul, Incheon and Gyeonggi on Sunday, the loosened restrictions will probably last for only a single week before the Chuseok holidays kick in. 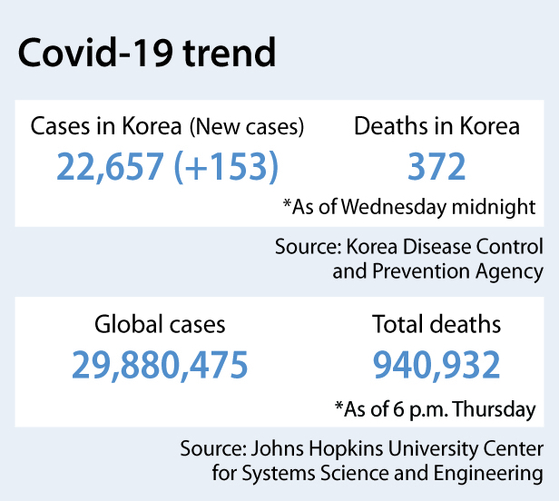 Officials said that discussions were also underway for an overhaul of the current three-tier social distancing system to make some changes in specific restrictions, and also the criteria by which the central government decides when to raise or lower the levels.

Details are expected to be relayed by the end of October.

Among Wednesday’s 153 new cases, 145 were local infections, according to KDCA data, including 62 in Seoul, 52 in Gyeonggi, nine in South Chungcheong, seven in Incheon, six in North Gyeongsang, three in South Gyeongsang, two in each Busan and Daegu and one each in Gwangju and Daejeon.

Out of eight imported cases, four were from Uzbekistan and one each from the Philippines, Indonesia, the United States and Canada.

Five people died Wednesday, bringing total deaths to 372, while 233 people recovered, bringing total recoveries to 19,543. As of Wednesday at midnight, 22,657 coronavirus patients had been counted in all.