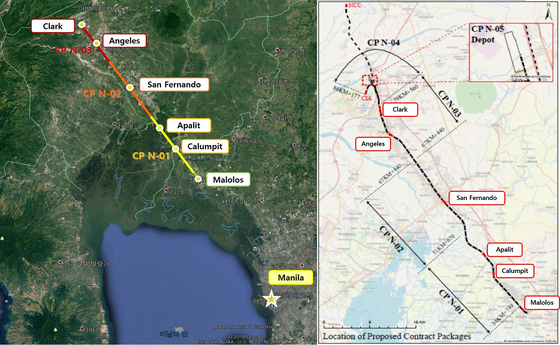 
Hyundai Engineering & Construction (Hyundai E&C) won a contract for the construction of the No. 1 section for the North-South Commuter Railway project in the Philippines.

The Department of Transportation made the award on Sept. 18 for the 670-billion-won ($578.6-million) project. Hyundai E&C is the project supervisor, and it is responsible for 57.5 percent, or 383.8 billion won, of the construction.

Before winning the contract, Hyundai E&C formed a partnership with Quezon City-based Megawide and and Korea's Dong-Ah Geological.

The No. 1 section is part of the North-South Commuter Railway, which extends 52 kilometers (32 miles) from Malalos, north of capital Manila, to Clark. The project has five sections total. The section that Hyundai E&C is building covers two ground-level stations and a 17-kilometer elevated bridge. Completion is expected to take 48 months.

Hyundai E&C has been active in the Philippines since 1986, when it won an Asian Development Bank order.

Through North-South Commuter Rail project, the government of the Philippines aims to improve accessibility in the country by shortening the travel time between Manila and Clark. It also hopes to solve the traffic congestion issue in the capital region and decrease travel expenses as well as carbon dioxide emissions.

The opening of the railway is expected to help the local tourism industry by creating jobs in system operation.

“This order was won during dire economic conditions amid the coronavirus pandemic, and Hyundai E&C will use its expertise in railway construction to build a high-quality infrastructure in the Philippines,” said a spokesperson for Hyundai E&C. “Going forward, Hyundai will continue to strengthen its competitive edge in construction and cultivate new growth engines.”