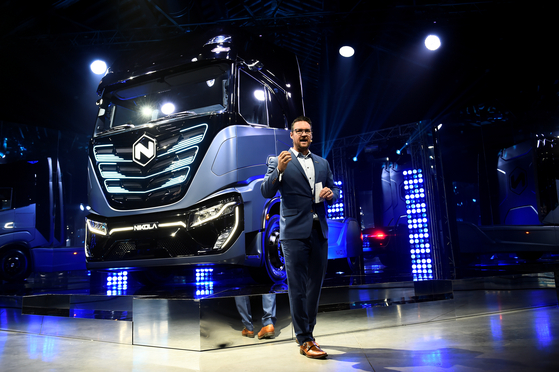 Trevor Milton who recently resigned as the executive chairman of Nikola speaks during presentation of its new full-electric and hydrogen fuel-cell battery trucks in partnership with CNH Industrial, at an event in Turin, Italy, December 2, 2019. [REUTERS]


With the shares of Nasdaq-listed Nikola down 19 percent on Monday, and far from their all-time high, Korean investors in the U.S. hydrogen and electric automotive company have not made as much money as had been hoped, while some may have lost a bundle.

Phoenix-based Nikola has been accused by a short-seller of being a little more than bluff, and news reports indicate that the Justice Department and the Securities and Exchange Commission are investigating. The company had published videos of one of its vehicles rolling down a hill as if it was driving under its own power.

Hanwha Energy and Hanwha General Chemical purchased a combined 6.1 percent of the company for $100 million in 2018 ahead of the June 2020 initial public offering. The shares are still worth an estimated $610 million, though the holding is far down from the $2 billion it was probably worth in early June.

Hanwha Q Cells is the exclusive provider to Nikola of solar panels, which will be used to generate clean energy.

According to data compiled by Korea Securities Depository Tuesday, investors in Korea were holding Nikola shares worth 170 billion won as of Monday. With the Nikola shares falling by almost 20 percent, value of those held by retail investors here plunged by about 33.9 billion won.