A scene from tvN variety show "The Sixth Sense." [TVN]


When Lee Young-ja won two of three Grand Prize trophies in the annual Entertainment Awards ceremonies by the terrestrial broadcasters in 2018, she became the very first female entertainer to receive the top honors from KBS, and only the second from MBC in over a nearly two-decade span. 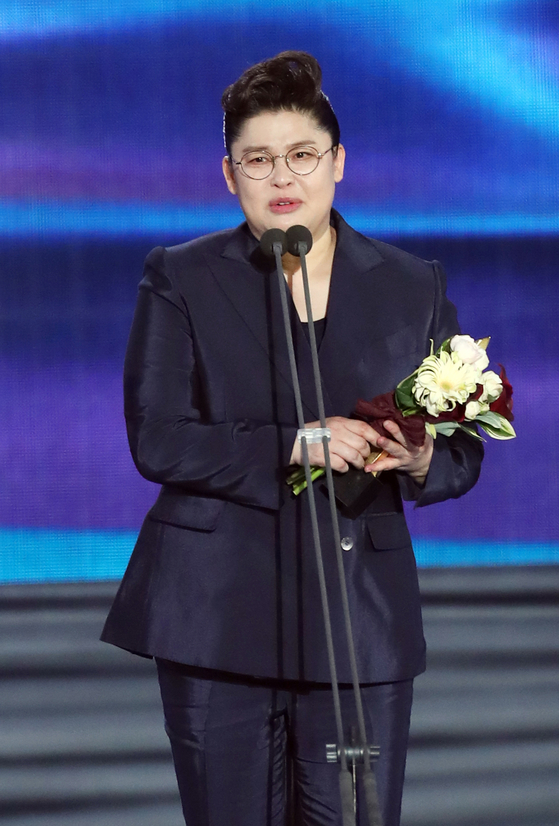 
Research conducted by the Korea Communications Standards Commission evaluated that 39 popular reality shows aired on the three broadcasters and five cable channels in May 2018 had a ratio of male and female appearances of 62.7 and 37.3 percent. Gender ratios of emcees were almost two to one, with 493 male entertainers leading programs with only 252 female entertainers in comparison.


The lack of female talent on television screens was again made apparent when comedian Park Na-rae won the next year’s Grand Prize in MBC Entertainment Awards, after being a nominee for the previous three years. Comedian Jang Do-yeon took her first Best Entertainer Award, the very first time she ever received an award since her debut in the entertainment industry in 2007. 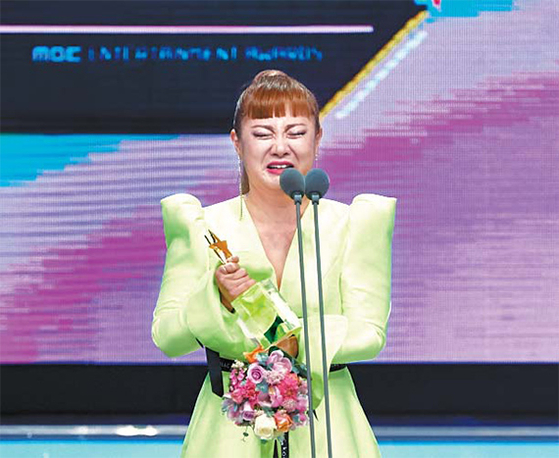 
“[From the seats] I realized there were only five stairs to get over here [to the stage],” Jang said during her acceptance speech. “But it took me 13 years to climb up those last five steps.”

Comedian Kim Sook, who took home the Top Excellence Award in Music & Talk, said that this was her first time attending the MBC award ceremony in her 25-year career.

What the lack of female recipients outlined was how entertainment shows were predominantly, overwhelmingly male-centered. The bias was that female-led programs are “boring” and conservative broadcasters preferred to stick to the old, “safer” formats which garnered success with shows such as “Infinite Challenge” and “2 Days & 1 Night,” both of which had viewership ratings over 30 percent at their highest.

“Before, female comedians and entertainers could not lead the shows independently because they were ultimately competing on an uneven playing field,” culture critic Kim Heon-sik said. “There didn’t exist any role models in programs or characters they could relate to, so they would mimic those of their counterparts without expressing their own colors or personalities. Since there was no firm foundation [and a lacking database], they were unstable and would oblige to what the broadcasters ordered them to do.” 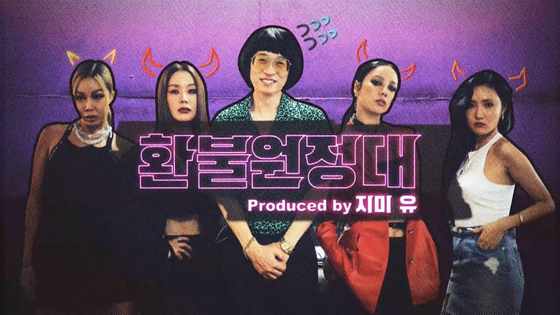 A poster for project group "Refund Sisters" from MBC's "Hangout With Yoo." [MBC]


However, the tables may finally be turning. Some of the hottest shows airing these days are female led, such as “Refund Sisters” on MBC’s “Hangout With Yoo,” “The Sixth Sense” on tvN and “Sporty Sisters” on E Channel.

While the early-bound success of “Refund Sisters” was, what some might say to be inevitable considering that it is a collaboration of legendary celebrities Lee Hyo-ri, Uhm Jung-hwa and trending celebrities Jessi and Hwasa, other shows mark a period of change, a breakthrough of a decades-long glass ceiling on television.

Producer Jeong Cheol-min said that he was looking for something out of the conventional forms of variety shows when he first started to work on “The Sixth Sense,” a mystery variety show consisting of Yoo Jae-suk as the main emcee and four members — Jessi, Jeon So-min, Oh Na-ra and Mijoo of the girl group Lovelyz.

“I started the show with Yoo as the main emcee,” Jeong told the Korea JoongAng Daily via email. “Then as I began to consider other members, I wanted to try something different. The chemistry amongst male entertainers was already shown on other shows, and I’ve already tried mixing male and female entertainers on my prior show ‘Running Man,’ which led me to imagine what would it be like if Yoo was surrounded by female members.

“From the outset of the planning, I realized the importance of the chemistry between our female members if our show was to be successful,” Jeong said. “And I believe that Yoo is the only main emcee adequate to blend well with the members, not overshadow them but to add a strong presence.”

Bang Hyeon-yeong, the chief producer behind “Sporty Sisters,” realized that more and more viewers choose to watch shows based on the program’s personality and content itself rather than the fame of the celebrities or the broadcasters. The show is the first to gather female athletes, giving them a chance to interact and try out new experiences that they previously hadn't had a chance to due to their intense training schedules. 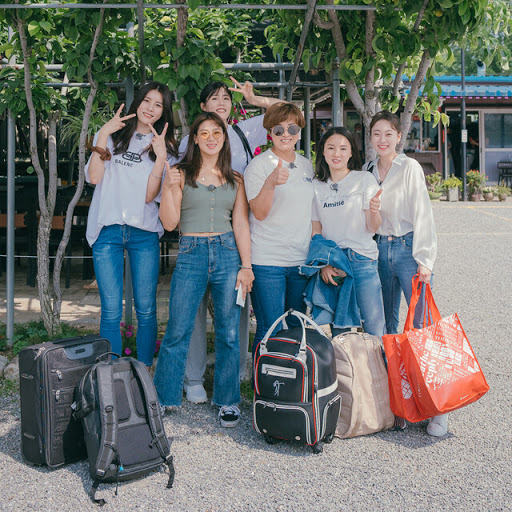 Female athletes pose for the camera during the filming of their variety show "Sporty Sisters" on E Channel. [TCAST]


“We still have a long way to go, but we were completely unfathomed by the response,” Bang said. “I knew when I first started forming this show that the worlds of these female athletes was closed off from the media — they had their own stories to tell, I could see that, but those were only conducted in press interviews. I thought it would be the most natural way to draw out their stories in a more relaxed environment, such as on a reality show."

While Bang sees the possibility in these female-centered shows, she also views them as a result of the demand to see new show forms and faces by audiences tired of seeing the same old faces in all-too-familiar formats.

“We’ve discovered these female characters in our search for a new story,” Bang said. “And I think the channel is seeing the possibility from the shows, and it’s also likely that we can expand [the scale] of the show. But it doesn’t have to be about women—[they just happen to be] fresh narratives that the viewers nowadays are looking for.” 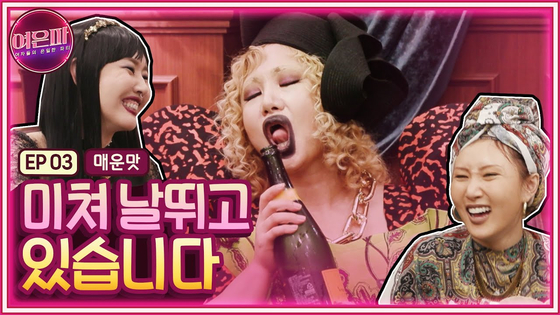 
Culture critic Kim also sees the diversifying platforms as a new gateway for female entertainers to tell their stories in a way that they want. For instance, “Girls’ Secret Party,” a digital spinoff on YouTube from the popular MBC show “I Live Alone” — consisting of members Han Hye-jin, Park Na-rae and Hwasa — focuses on the solidarity the trio has built over the years. The platform also allows members to be more honest and straightforward as they’re freed from broadcasters’ regulations. The highest-per-episode views amount to 5 million views, while overall the series has accumulated over 20 million views.

“Such platforms give them a chance to try something new,” Kim said. “Broadcasters are conservative— they stay away from trial-and-error experimentation and prefer to stick to the old formats which once guaranteed success. So even though female entertainers want to try out something different, they weren’t received favorably. But now, they have other ways to interact with the media [through the platforms], such as comedians Lee, Park, Kim Sook and Song Eun-yi— they started their own independent channels on YouTube and podcasts sharing their own concepts, lifestyles and dogmas—this distinguished them from the previous male-dominated formats and content. These trials and success cases became new success models, and now, in reverse, the broadcasters seem to be following the changing trend led by female entertainers.”