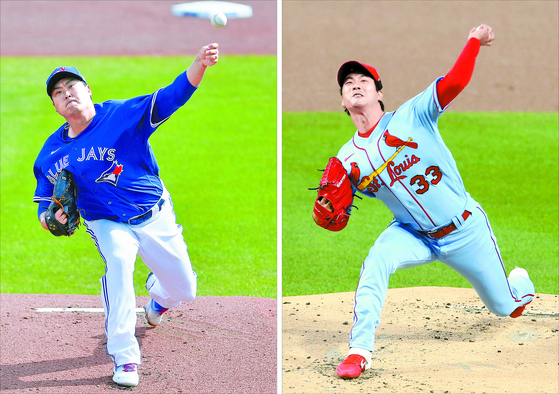 Ryu Hyun-jin of the Toronto Blue Jays, left, and Kim Kwang-hyun of the St.Louis Cardinals will make their starts on the same day for the fourth time this season on Thursday. [AP/YONHAP, REUTERS/YONHAP]

For the fourth and the final time this season, the two Korean major leaguers will be starting on the same day on Thursday. With the clock winding down on the shortened 2020 season, they'll both be looking to finish strong.


Ryu Hyun-jin of the Toronto Blue Jays and Kim Kwang-hyun of the St. Louis Cardinals have regularly made headlines this season as they seem to have almost identical schedules. Expectations have been high every time they've played that they might finally pick up wins on the same day, but so far that hasn't happened.


This will be the fourth time this season that the two have started on the same day and once again, fans will be hoping to see both pitchers pick up wins for the first time in history.

Ryu will start his game first against the New York Yankees at Sahlen Field in Buffalo, New York. The game will start at 6:37 p.m. on Thursday, or 7:37 a.m. on Friday in Korea.

This will be Ryu’s second time pitching against the Yankees this season and his old struggles against the New York side have continued so far. Last time Ryu pitched against the Yankees, he walked away with a no-decision, but it was one of his worst games with the Blue Jays. Throughout five innings, Ryu gave up five runs, including three homers.

Thanks to the Blue Jays’ incredible scoring streak — 10 runs at the bottom of the sixth inning — Ryu avoided a loss.

Throughout his career in the major league, the Yankees seemed to be one of Ryu’s biggest weaknesses. Back when he played for the Los Angeles Dodgers, he started against the Yankees twice, picking up losses in both games.

Ryu faced the Yankees for the first time back in June 2013. During that game, Ryu picked up a loss by giving up three runs and five hits, which included a home run, throughout six innings.

Last season he faced the Yankees for a second time, once again picking up a loss and giving up seven runs and nine hits including three homers, throughout four and one-third of an inning.

This season with the Blue Jays, Ryu has picked up four wins and two losses with a 3.00 ERA. Although he hasn't picked up as many wins as he used to back when he played for the Dodgers, he has been highly complimented by the manager and his teammates.

Although the Blue Jays are ranked third in the American League East division, the young team still has a slim shot at playing in the postseason as the Blue Jays can play in the wildcard if they manage to finish their season strong and keep their winning percentage high enough.

While Ryu hopes to end his nightmare against the Yankees and cement his role as the Blue Jays’ ace pitcher, Kim is looking to end his rookie season on a high note.

Just a little less than two hours into Ryu’s game, Kim will also be making his last start of the season against the Milwaukee Brewers at Busch Stadium in St. Louis, Missouri, starting at 7:15 p.m., or 9:15 a.m. on Friday in Korea.

Kim joined the Cardinals this season with the hope of making the club’s starting rotation. As the Cardinals lacked left-handed pitchers, there were signs that Kim could end up debuting as a starter, but it wasn't to be and he started his MLB career in the bullpen.

Kim picked up one save for the Cardinals and was given an unexpected shot as a starter when a number of Cardinals players tested positive for the coronavirus.

Kim didn’t disappoint. Pitching in three and two-thirds of an inning for the Cardinals against the Chicago Cubs on Aug. 17, Kim gave up one run and walked away with a no-decision.

Then in his next start against the Cincinnati Reds on Aug. 22, Kim continued to impress by tossing six scoreless innings to pick up his first-ever win in a major league game.

Kim briefly dropped out of the rotation with a kidney ailment but that didn’t affect his performance for the season as he’s continued his strong pitching. He was added onto the Cardinals’ injured list but quickly came back to the rotation. Kim has picked up two wins, no losses and is heading into the last match of his rookie season with an astounding ERA of 1.59.

Just like the Blue Jays, the Cardinals also have a shot at the postseason.