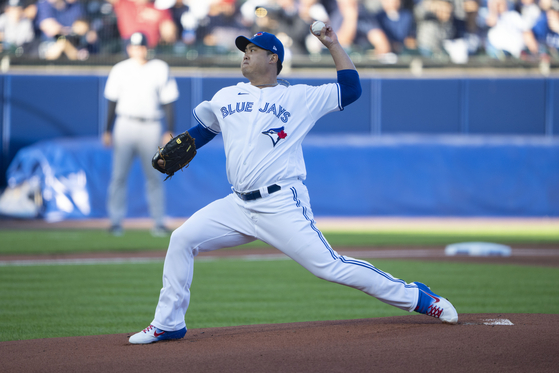 
Ryu Hyun-jin and Kim Kwang-hyun both walked away with no decisions in their second same day start of the season on Tuesday, each pitching six innings without securing a win.

Despite the two no decisions, both Ryu and Kim pitched good games.

Ryu allowed six earned runs and four walks in six innings for the Toronto Blue Jays. The Canadian side went on to lose 6-5 to the New York Yankees, but when Ryu left the mound his team had a 5-3 lead.

Control was a concern for Ryu, with only three strikeouts in the game. Tuesday marked the second time this season the Korean ace has thrown more walks than strikeouts. Ryu has now given up eight walks across three games in June, matching the number he gave up in all ten outings in April and May.

Yet despite that, Ryu got the job done. Throughout six innings he only allowed five hits — two solo homers, two singles and a double. Just three earned runs meant that despite the concerns over his performance so far this month, Ryu earned a quality start for his second game in a row. 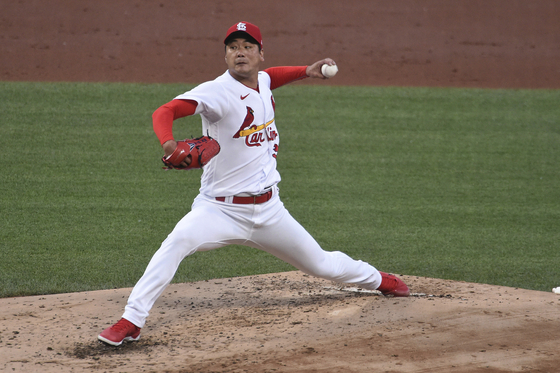 St. Louis Cardinals starting pitcher Kim Kwang-hyun Kim throws a pitch during the third inning of a baseball game against the Miami Marlins in St. Louis, Missouri on Tuesday. [AP/YONHAP]


Kim allowed one run and five walks in six innings for the St. Louis Cardinals in a 2-1 win against the Miami Marlins. The six-inning outing is an important one for the Korean southpaw, who has been struggling to prove he can go deep in games. Tuesday's outing was Kim's longest this season.

Kim's five walks are the most he's allowed in any game this season, but he also threw six strikeouts. He allowed only three hits, all singles, with the one run only crossing the plate after a throwing error allowed a runner to move into scoring position.

Kim battled through a 28-pitch third inning without allowing any more damage and walked away with his first quality start of the season. He threw 49 strikes and 53 balls, but was still able to keep the Cardinals in the game, retiring 12 of the last 13 batters he faced.

Tuesday's game marked Kim's return from a brief stint on the 10-day injured list (IL) due to back pain.

Ryu and Kim also started on the same day on June 4, when they both picked up losses. On that day, Ryu gave up six earned runs and three walks in a 13-1 loss to the Houston Astros at home, while Kim gave up three earned runs in three innings before taking himself out of the game due to back pain that eventually landed him on the IL.