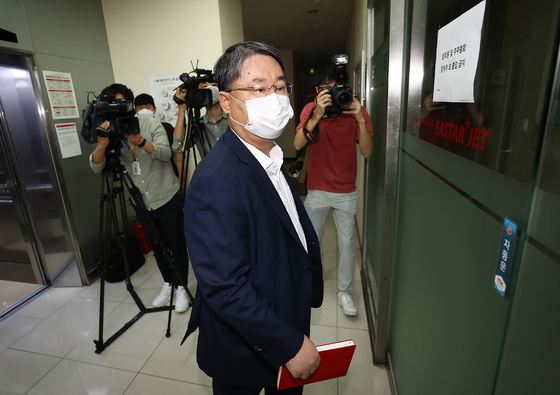 
Eastar Jet CEO Choi Jong-gu on Thursday accused the company’s pilot union of making false accusations against management and said he will hold them criminally and civilly liable.

Choi’s statement came after the pilot union held a press event on Tuesday, accusing the cash-strapped airline’s management of having been preoccupied in selling off the company instead of showing sincere concern for employment issues.

“I have endured and endured again,” Choi wrote in a statement, saying he felt guilty about having made the airline employees suffer from the impact of Covid-19 and the “incompetence of the management.”

“But I’ve decided to no longer ignore the fabrications of the pilot union. [They’re] crushing the thin chance of the firm’s recovery and driving it to destruction, and [Eastar Jet] will hold them criminally and civilly liable to the point that is allowed by the law,” Choi added.

Choi said the pilot union’s argument that Eastar Jet’s management and major shareholders intentionally drained the company after planning to sell it is “groundless.”

“If [the company] had planned to sell it, [the management] would have invested more effort to raise the company value.” Choi also disagreed with the pilot union’s implication that the company had committed accounting fraud.