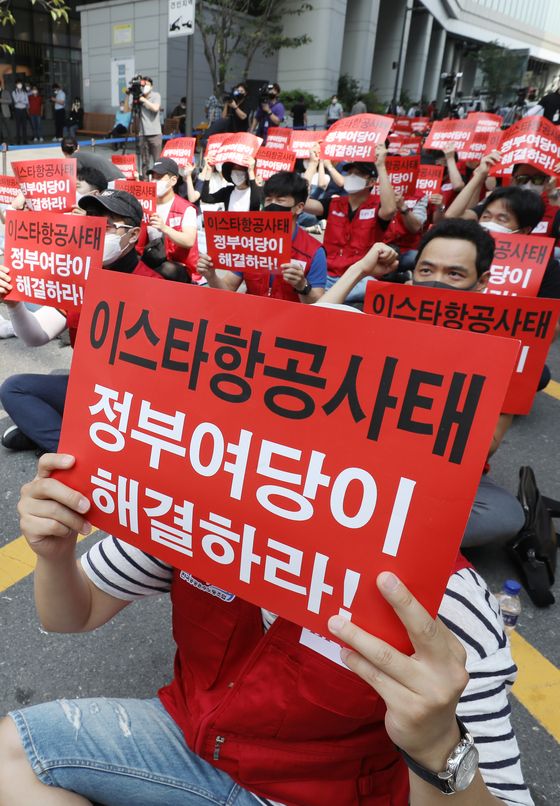 
Eastar Jet and Jeju Air continue going around in circles as they trade claims and counterclaims and get no closer to a resolution.

The deal got hung up as air travel collapsed and the target company stopped carrying passengers and became increasingly indebted. With the transaction failing to close, the two companies have been issuing press release after press release accusing the other of bad behavior and various infractions.

Jeju Air has said that Eastar Jet has to settle its outstanding wage bill and other obligations before the acquisition can be closed, while Eastar Jet has been accusing Jeju Air of interfering in the restructuring of Eastar Jet.

The mud-slinging continued Tuesday, with Eastar Jet writing that Jeju Air hasn't been committed to the deal, that it hasn't responded to requests for conversation since late April and that it is willing to communicate only through documents. It also noted that Jeju Air has been fully informed all along and shouldn't act surprised about the condition of the acquisition target.

“Jeju Air was already aware of the problems that may result from lack of funds before the stock purchase agreement,” Eastar Jet wrote.

A protest was staged by the Eastar Jet’s pilot union in front of AK Group’s headquarters in Mapo, western Seoul, on Wednesday. The protesters said they will hold Jeju Air responsible if it refuses to acquire Eastar Jet and bankruptcy results.

“Shutdown was a clear direction and demand from Jeju Air,” read the statement. It blamed the acquirer for Eastar Jet’s restructuring in late March, saying the measures were taken based on the standard and scale proposed by Jeju Air.

Eastar Jet also addressed a brewing subplot on Tuesday, denying a Jeju Air claim regarding the leaking of confidential discussions between the two companies.

Last week, Jeju Air gave Eastar Jet 10 operating days to resolve obligations related to Thai Eastar Jet aircraft leases as well as unpaid wages. The due date is July 15. Jeju Air has the right to cancel the acquisition if Eastar Jet fails to meet the obligations by the due date.

According to Jeju Air, Eastar Jet has 170 billion won in accounts payable and 26 billion won of unpaid wages.