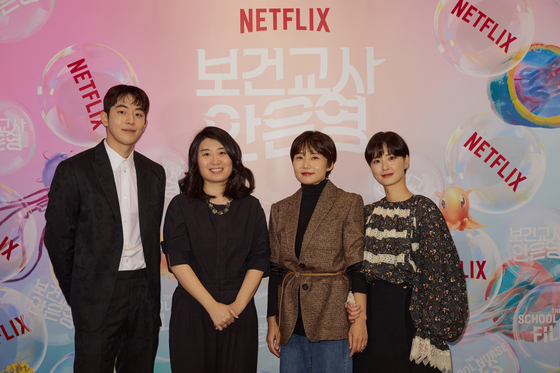 
Adapted from Chung Se-rang's novel “The School Nurse Files,” the upcoming Netflix original drama series with the same title is a fantasy comedy that plays a world of unlimited imagination where a school nurse fights off invisible jelly monsters with toy knives and BB guns.

It may sound more like a children’s animation film synopsis, but don’t be fooled, as this new Netflix series directed by Lee Kyoung-mi of female-led film “Crush and Blush” (2008) delves deep into humanity and how our desire shapes us as human beings.

“Ahn Eun-young, who appears to be an ordinary school nurse, has a special ability to be able to see and kill jelly monsters floating around the world," director Lee said in an online press event on Thursday.

"After she gets assigned to a new school, she learns that unusual things are happening inside the school. The story is about Ahn teaming up with a fellow teacher Hong In-pyo to solve the mystery behind the school."

Actor Jung Yu-mi plays the lead character Ahn Eun-young, a high school nurse who tries to protect the students from jelly monsters that only she can see by using her rainbow-colored toy knife and a BB gun. The jelly monsters represent the leftover desires that living or dead creatures mark on their paths, which can stick to others and manipulate their actions. Actor Nam Joo-hyuk portrays Hong In-pyo, a Chinese language teacher who acts as a portable charger to Ahn by giving her special strength.

“In the past films I've worked on, I always wrote my own screenplays," the director said.

"But this time, I could have a whole new experience by examining another author's imagination and applying it to my work. I enjoyed it because the world within the story felt so limitless."

The parts Lee enjoyed the most while shooting the series was visualizing the jelly monsters by referencing real animals that exist in our world.

“We studied the beautiful qualities of animals and looked for ways we could make them more vibrant and graceful,” Lee said.

"I felt myself growing more imaginative as I worked on the series," Jung said. "I am glad to have worked with Nam with an interesting scenario. Thanks to his quick-witted style of acting, I could bring out natural reactions into the screen by following his lead."

“I decided to join the team because the subject matter itself was quite fresh, and I wanted to take a role in such an interesting scenario,” Nam said. “I wondered how the jellies in the novel could be portrayed in the screen.”

The new series “The School Nurse Files” is set for release on Sept. 25.