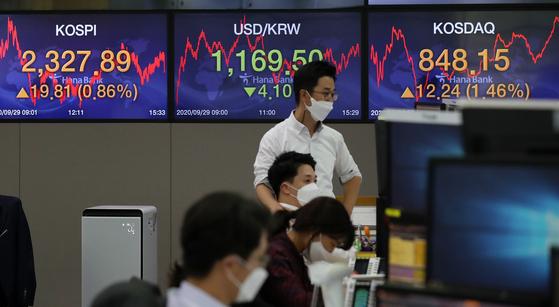 A screen shows the closing figure for the Kospi in a trading room at Hana Bank, central Seoul, Tuesday. [NEWS 1]


Shares extended their winning streak to a third session Tuesday, as progress in negotiations for a new U.S. fiscal stimulus plan boosted investor appetite for risky assets. The won rose against the dollar.

Trading volume was moderate at about 626 million shares worth some 8.9 trillion won ($7.6 billion), with gainers outnumbering losers 667 to 192.


The market got off to a strong start after a 1.29 percent jump the previous session.

U.S. Democrats rolled out a $2.2 trillion stimulus proposal, seeking a breakthrough in the stalled stimulus talks with the Republicans.

Investor appetite for risk further hiked, as House Speaker Nancy Pelosi said there is a chance she and Treasury Secretary Steven Mnuchin could still reach a deal.

The local currency closed at 1,169.5 won per dollar, down 4.1 won from the previous session's close.