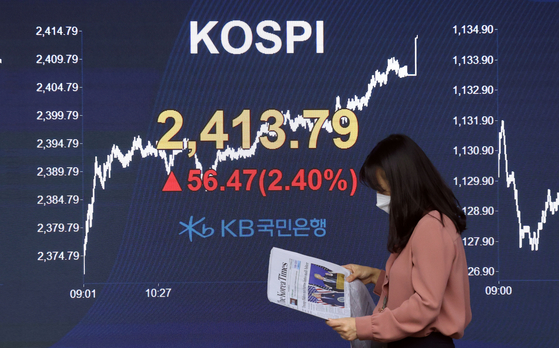 A screen shows the closing figure for the Kospi in a trading room in KB Kookmin Bank in Jung District, central Seoul, on Thursday. [YONHAP]


Stocks jumped over 2 percent Thursday on massive foreign buying amid uncertainties over the U.S. presidential election results. The won rose against the dollar.

Trading volume was high at about 691 million shares worth some 12.4 trillion won ($11 billion), with gainers outnumbering losers 713 to 141.

Stocks climbed above the 2,400 level, as investors rushed for tech and bio stocks as U.S. election uncertainties continued.

The Kospi gained for a fourth consecutive session, with hopes that the stocks will advance after the U.S. election.

"It seems like the markets are projecting investor hopes that the United States will soon wrap up the election event and manage to remove some policy complications related to the [stimulus]," Kyobo Securities analyst Kim Hyung-ryeol said.

However, local analysts noted that the U.S. election uncertainties may not ease in the short term.

Improved third-quarter earnings by major tech and financial firms also fueled hopes for an economic rebound from the pandemic.

The local currency closed at 1,128.2 won per dollar, down 9.5 won from the previous session's close.