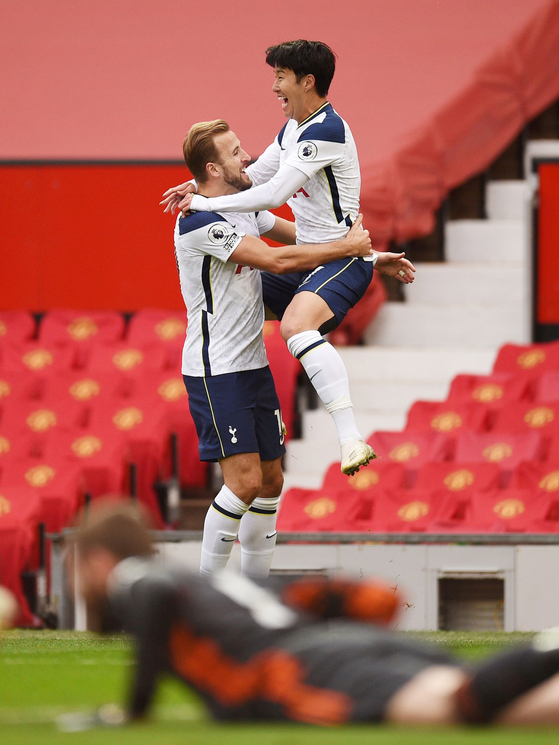 Son Heung-min of Tottenham Hotspur, right, celebrates with Harry Kane after scoring Spurs' second goal of the match against Manchester United at Old Trafford in Manchester, England on Sunday. [REUTERS/YONHAP]


One week after getting pulled out of a game with a suspected hamstring injury, Son Heung-min of Tottenham Hotspur is back.

During Spurs' English Premier League match against Manchester United on Sunday, Son scored two goals — in the seventh and 37th minutes — to help his side pick up a big 6-1 victory at Old Trafford.

Just one week earlier, Son was pulled out of Spurs’ match against Newcastle at the end of the first half. Originally, it was reported that Son was expected to miss a couple of matches, but the Korean striker was back on the pitch and ready to go on Sunday.

Despite limited training time after his injury, Son continued his hot streak.

It was actually Manchester United who scored the opener with Bruno Fernandes' penalty only two minutes into the match. Spurs quickly responded as Tanguy Ndombele scored an equalizer in the fourth minute, just two minutes after United scored the opener. Then, just three minutes after that, in the seventh minute, Son scored Spurs’ second goal of the match, assisted by Harry Kane.

Spurs were given an advantage as United’s Anthony Martial was given a red card, meaning Spurs had one more player than United for the rest of the match. And they made sure to take advantage.

In the 30th minute, Kane scored Spurs’ third goal of the match, this time assisted by Son. To finish off the first half, Son scored another in the 37th minute to extend Spurs’ lead to 4-1, assisted by Serge Aurier.

“Some magic in my hamstring,” Son told Spurs TV after the match. “Obviously, I was injured. I was worried about [that]. I wanted to play this big game and I want to help the team. And I was treated very, very hard [during] training. I couldn’t train hard because I had a small injury. But, no. What can I say with this performance? With this result? I’m more than happy to win this game and buzzing.”

Once the second half of the match kicked off, Spurs continued to score more and more. Aurier scored the fifth goal of the match and then Kane added another in the 79th, scoring a penalty.

Son was substituted for Ben Davies in the 73rd minute of the match.

With the win, Spurs are ranked sixth in the 2020-21 Premier League standing with two wins, a draw and a loss, totaling seven points.

Once again, Son and Kane showed perfect teamwork as they each added assists for each other’s goals. The pair have proven lethal since Son joined Spurs in 2015, teaming up on more than 25 Premier League goals, more than any other pair in the league over the same period.

Even this season, when Son scored four goals during Spurs’ Premier League match against Southampton on Sept. 20, Kane assisted all four.

“For especially for this season and obviously I say before I’m a little bit sad that he didn’t score the second one,” Son said. “But we won the game. I’m buzzing to get three points here, [at] Old Trafford.”

Such a big win at Old Trafford is a memorable victory for Son as he grew up watching former Korean footballer Park Ji-sung play for the club. Although Manchester United may not be off to the best start to the season, they are a dominant team in Premier League history, as they’ve won 20 Premier League titles, 12 FA Cups and three UEFA Champions Leagues.

Sunday's defeat was the first time since 1957 that United have conceded four goals in the first half. It also ties the record for the club's worst-ever Premier League defeat, originally set with a 6-1 defeat against Manchester City in 2011.

“As a kid, you grew up watching this stadium,” Son said. “I mean for me, especially, because [Park] Ji-sung was playing here. And then you naturally watch so many games for United. But you see this statement we beat them 6-1. It’s just incredible. I’m really proud of the team and proud of myself as well.”

“It was an amazing performance,” Mourinho was quoted as saying on the Spurs' website. “I can imagine some anti-Spurs people will say it was 11 against 10 for the second half, but I have to say we were so much better than them for the whole of the first half, 11 against 11, lots of confidence in the team, losing 1-0 to a silly penalty, no problem. The team just played, played, played, reacted, kept playing, playing, playing and when we felt weakness, we went for the jugular, and you don’t do that if you are not an ultra-confident team.”

Spurs will continue their season with another Premier League match against West Ham on Sunday, Oct. 19, local time, or 12:30 a.m., on Oct. 20 in Korea. This time, Spurs will be heading back to Tottenham Hotspur Stadium.